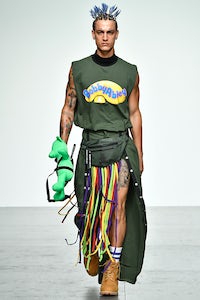 LONDON, United Kingdom — Bobby Abley’s pre-teenage fashion rampage continued with his celebration of the Teletubbies’ 20th anniversary, following on from last season’s salute to the Power Rangers. He called his collection Messy Fun. A lot of the latter, for sure — Abley’s runway was a primary-coloured playhouse.

But there’s always more method than mess in his cheery madness. His cyber-styled hypersportswear was as precise as the eight packs on the Brazilian boys he favoured to model his clothes like his male muse Jhona Burjack, who infused as much insouciant sexiness into a pink tutu as he did chest-baring red dungarees.

That quality will always be Abley’s USP, just as his female muse, now and forever, is Xtina Aguilera, at her down and dirrtiest. His favourite Tubby is Po, the shortest and youngest. They both made guest appearances on his spring runway, Xtina as a t-shirt, Po as a leather rucksack. There was, as usual, some provocation in the sly juxtaposition of innocence and experience — and more food for thought in Abley’s mot du jour: FOREIGN.