Tomas Maier’s transmutation of the ordinary into the anything was the thrust of the designer's women’s collection, but it’s a lot harder to apply it to his menswear. 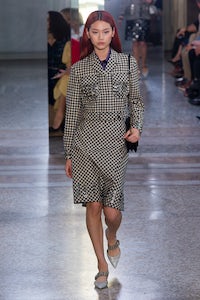 Tomas Maier’s transmutation of the ordinary into the anything was the thrust of the designer's women’s collection, but it’s a lot harder to apply it to his menswear.

MILAN, Italy — Tomas Maier’s collections for Bottega Veneta are always a read, a thick mesh of subtexts that often embrace quietly provocative ideas. And since he started showing his menswear and his womenswear at the same time, that state of affairs has only become more layered. A lot of that is to do with the model casting, and the innate ability of young women to look so much more worldly than their male peers. That tension — with its insinuation that women are always going to be able to run rings around men — roots Maier’s work in a film noir sensibility that gives his designs a deliciously seamy tang.

He doesn’t run away from it either. If he maintained there was a functional bent in his new womenswear, he emphasised it with grommeting and embellishment that pushed the notion to a fetishistic degree. Hardware! As in Adwoa Aboah red cotton smock liberally lashed with tiny eyelets. Or the all-American-pie gingham jacket and skirt also trimmed with metal.

In the name of utility, Maier was initially partial to sturdy cotton and washable suede (or Alcantara, as it would probably rather be called) and even (or so it seemed) plastic, but there were studs and paillettes to lend an exotic gloss. And then real suede and rich silks took over. And that was, in fact, the thrust of the women’s collection: the transmutation of the ordinary into the anything but, even if the glass-beaded fringing over-egged the pudding.

Still, that’s fashion alchemy. And it’s a lot harder to apply it to menswear. What Maier had going for him this season was colour. For both men and women, he chose decadent, velvety tones like chartreuse, lilac, steel grey, a sickly shade of yellow dubbed camomile and a muddy pink he called hibiscus.

They were apparently inspired by the paintjobs at Kedleston Hall, a English country house. It belongs to the Curzons, one of the grandest British families. They have lived on their land since the 13th century. Noir oracle Raymond Chandler would have made hay with the intricacies of their family saga, and Tomas Maier would have loved every minute of it.