What saves Virgil Abloh from sounding pretentious is the freshness with which he embraces the accelerated sampling and mash-up of his Millennial-friendly branding. 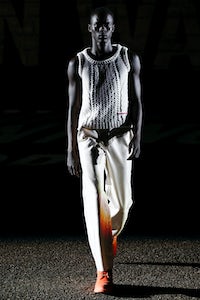 What saves Virgil Abloh from sounding pretentious is the freshness with which he embraces the accelerated sampling and mash-up of his Millennial-friendly branding.

FLORENCE, Italy — The art-versus-fashion debate has been going on for quite a while now, yet the riddle remains unsolved. Virgil Abloh — the volcanic mastermind behind the fast-booming, situationist-looking, evolved-streetwear brand Off-White — seems to think he has found the answer.

According to the press notes of the show he staged on Thursday in Florence as a special guest of Pitti Uomo, he currently calls himself "a multihypenate artist working in the fashion sphere as Off-White c/o Virgil Abloh." Now that's an answer. He even named "a fellow" — Jenny Holzer, an American artist who provided the touching words inspired by the war in Syria, which were projected on the facade of Palazzo Pitti during the hour-long wait for the show.

One begins to wonder how groundbreaking innovators like Rei Kawakubo or Yohji Yamomoto, who are obvious references for both Off-White's latest iteration and past collections, call themselves on their turns.

What saves Abloh from sounding needlessly pretentious, even when he is dangerously close to seeming so, is the freshness and directness with which he admits that Off-White is actually a clever marketing exercise targeted at Millennials. It was the term he repeated the most during the press conference the morning of the show.

The shameless appropriation, glaring hyper-visibility, accelerated sampling and violent mash-up that characterise Off-White are all millennial- and Instagram-friendly branding solutions, in tune with the permanent ADD syndrome which affects new generations.

Being in Florence, Abloh, who's all for adding a fresher, younger opinion to the fashion conversation, thought it was time to investigate tailoring the Off-White way. In other words, he felt ready to fashionably grow up and test new grounds; be a little bit more formal.

The result was a mash-up of voluminous streetwear in frankly fake fabrications — all heavily redolent of Raf Simons, with some Gosha Rubchinskiy thrown in for good measure — and deconstructed suiting spliced here and there. The self-announced reinvention of tailoring did not happen. Japanese designers have been doing this forever, even though Millennials abhor memory and history like the plague. Which is exactly what makes Abloh both irritating and fascinating. He can throw a sensational, Instagram-savvy move.

In this sense, involving Jenny Holzer was a bomb. Mixing fashion with the brutality of war is a dangerously silly move. The fact is that all this sensationalism is just born out of thin air. It's mere appearance, while real substance is lacking. Going conceptual, or political, is perfectly fine, unless it's a cover-up for bad or derivative design. Abloh should focus on design and then try to be a conceptual artist. Otherwise, it's just boring clothes with a pretentious frame.