In satisfying his own requirements, Justin O’Shea reckoned he’d be addressing plenty of men who felt just the way he did. 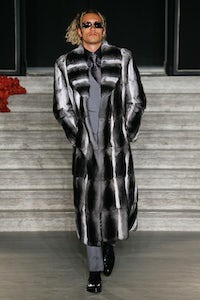 In satisfying his own requirements, Justin O’Shea reckoned he’d be addressing plenty of men who felt just the way he did.

PARIS, France — Entrepreneur, know thyself! If on-line retail wizard Justin O’Shea’s appointment as creative director of revered menswear brand Brioni was viewed in some quarters as fashion’s final surrender to the tyranny of the marketeer, you can only say that some quarters have never experienced Justin O’Shea.

As the buyer for German e-commerce site My Theresa, he was prone to second-skin, three-piece suits, and, when the mercury rose, equally likely to strip down to a wife-beater that flaunted his bulging, heavily tattoo-ed biceps, a vision which was re-animated at the close of O’Shea’s debut for Brioni yesterday when he took his bow thus clad, until a model thoughtfully draped him in the huge chinchilla coat that opened the show.

Undentable self-confidence is an O’Shea trait. When you know his story, you appreciate it’s hard-won. Besides, the testosterone is tempered by equally undentable good humour and that old rocker’s standby — lust for life. And he knows his business back to front.

Which is why O’Shea’s approach to Brioni was as much entrepreneurial as creative. In satisfying his own requirements, he reckoned he’d be addressing plenty of men who felt just the way he did. Hence, Metallica as the poster boys for his debut, showcased this week in giant posters in the windows of Colette, the Parisian temple of cool. They’re not just rock gods, they’re also multimillionaire businessmen, just as inspirational and aspirational to their own age group (fans who’ve been following them from the beginning would be in their 50s now) as they are to teenage metalloids.

O’Shea felt there’d be plenty of tailored jackets beneath which beat a heart of heavy metal. The casting for his show, more rangy rockers than pretty boy models, rammed the point home. They paraded against a backdrop of Marshall stacks. The only thing missing was a closing jam.

O’Shea’s identification with his own product was as specific as the double-breasted suit in a broken pinstripe with a crimson silk shirt and necktie with a very prominent knot, an outfit that could have been lifted from his own closet that very morning. Same with a three-piece suit in midnight velvet. But then O’Shea’s narrowcasting broke broad. Brioni has always stood for the quiet luxury of the best bespoke tailoring. O’Shea, with his natural Aussie boisterousness, wants to wake the neighbourhood up. First, there was that chinchilla. Then, there was a sweeping vicuna coat trimmed in more chinchilla. Then, the same in crocodile. Tell-the-world-I’ve-arrived pieces. Justin’s here!

O’Shea adjusted his men’s offering for a selection of womenswear, calculating from past experience that there’ll be a female audience for his masculine tailoring (traced with pearls along the yoke seams to soften them a little). Kinga Rajzak wore a chinchilla gilet. Eva Cavalli and Demi Moore were in the audience,  friends of O’Shea’s but also seasoned women of the world who you felt might usefully share their experiences with him. This debut was, after all, no seat-of-the-pants flier. O’Shea has already lived his own market research. 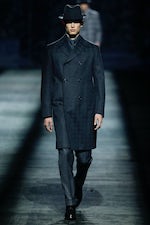 Tailoring With an Adventurous Twist