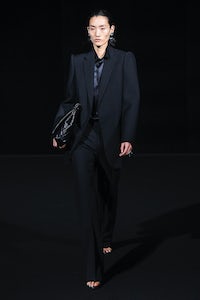 PARIS, France — Demna Gvasalia thinks extremely big. He said he’d been dreaming about building new roads in fashion so, for his latest Balenciaga show, he did just that. Laid his gigantic square show space with asphalt. It was so new I could still taste the tar hours later.

Gvasalia claims “the notion of the street” has been a big part of his modernisation of Balenciaga: parkas, puffas, sweats, T-shirts and jeans, rampant logophilia… and those Triple S’s! They were all present and correct in Sunday’s show, even if the sneakers were noticeably absent on feet. That’s because they were boxed inside the branded shopping bags the male models were carrying, which is the kind of sly touch that Gvasalia excels at. Similar to the way he acknowledged the critical importance of Paris to the Balenciaga story. Not with the high-falutin’ couture reference you might expect, but with an "I ❤️ Paris" T-shirt, and an Eiffel Tower ring whose vicious spike could do effective double duty in self-defence.

Still, it’s those couture refs — the codes of Cristobal’s legacy — that give Gvasalia’s Balenciaga its spine, because that’s what he feels compelled to mutate for modern times. The show opened with sharp-shouldered tailoring. No visible buttons — Gvasalia thinks buttons are “very retro” — so the lines were lean, clean and masterfully precise throughout the collection. Some of the Cristobalisms were clear — the baby doll dress, the cocoon coat — others less so. Outerwear, for instance, is fundamental to both Balenciaga and Gvasalia’s design DNA. Here, it was a spectacular, dramatic exploration of silhouette, fierce in a black leather look, lyrical in a chrysanthemum jacquard kimono, sensual in a huge pink cocoon.

Balenciaga himself was so profoundly innovative as a designer that the challenge he poses for his successor is maybe less about modernising the past than mastering it. How, for instance, could Gvasalia update the way Cristobal would shape a collar in the back to elongate the wearer’s neck? His answer was a kind of circular hoop effect to highlight the head and neck. Not quite as elegant. But one thing Gvasalia shares with the grand master is a keenness to highlight his craft. After last season’s psychedelic tunnel, he wanted the focus to be purely on the clothes. “Respecting garments as the main element of fashion,” he called it.

So there was no set to speak of (the stinky tarmac aside!), no distracting photographers’ pit (they were sequestered in another room) and awkward ambient lighting that felt at times like lightning flashing through distant clouds (not distracting at all!). The models rapidly covered the perimeter of the square, moving so ferociously and so close to the front row that they knocked knees here and there. Any closer and I could have been cocooned myself. But it certainly honed the eye for detail, such as the fact that Stella Tennant’s sequined gown left a trail of curled silver paillettes. An imperfectly perfect fashion souvenir that Gvasalia himself would surely appreciate.