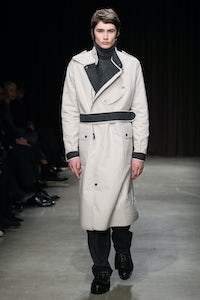 NEW YORK, United States — The thing about Hugo Boss is that its purpose — at least here in the US where it chose to stage its latest Autumn/Winter 2017 men’s runway show — has long been to provide young men with their first work suit. From there, the goal is to convert these young shoppers into brand loyalists who eventually trade up from HUGO Hugo Boss — which is sold at stores like Macy’s — to the ready-to-wear Boss collection, which is now being designed by newly appointed chief brand officer Ingo Wilts, a company veteran who last did a stint designing menswear at Tommy Hilfiger.

But Wilts faces a major challenge: young American men simply don’t buy as many suits at Macy’s — or anywhere else — anymore. And even when they do, their go-to has become J.Crew or Club Monaco, which deliver slim-cut, easy-to-tailor styles at good prices. Perhaps that helps to explain why, in the fourth quarter of Hugo Boss’ 2016 fiscal year, sales in the Americas were down 14 percent in local currencies.

It could just be a regional problem: in Mainland China, Boss’ comparable store sales are up 20 percent year on year. But today's globalised world means Wilts must create a consistent brand message across the company — ideally one that also feels less clinical than what has been conjured up in the past. For Autumn, he rightly focused on tailoring, looking to Boss suiting from the 1980s and 1990s to inform the collection’s boxier silhouettes rendered in grey flannels and classic pinstripes, styling turtlenecks under blazers for that classic “sport coat” look that's in vogue once again. The fisherman knits, too, had a certain charm.

But if the softened suiting is headed in the right direction, the sportier pieces — like a leather anorak, a wool flight suit, a coat decorated with a large utilitarian pocket set awkwardly between the shoulder blades — were clunkier. The collection was designed with the “global traveller” in mind, but it was difficult to discern who exactly that was.

To be sure, Boss’ underlying challenges run far deeper than anything a runway collection can easily salve. However, Wilts’ work will set the overall tone for the brand, which means he had better delineate more clearly what Boss means beyond that first work suit.