PARIS, France — The question when haute couture week hits is always the same: can couture, the deepest and slowest of all fashion expression, ever be modern in our hyper-fast digital age? It can indeed, if the Spring/Summer 2018 season, which closed yesterday in Paris, is any measure. Just look at Pierpaolo Piccioli, the undisputed winner of the season, and the always inventive John Galliano. Elsewhere, however, anachronistic dreams of princesses persist.

Overall, the week was a bumpy ride with an uplifting finale. The general atmosphere was, at times, strange — and not just because of the general sense of fatigue these fashion marathons induce. At the beginning of the week, it appeared as if a reactionary movement was taking hold, full of visions that have little to no relevance to the present tense. Of course, with haute couture — by definition targeted to the happy few who have the economic means to afford it — is shaped by a different set of values to ready-to-wear. Fashion's preoccupations du moment, gritty metropolitan realism in particular, do not affect the couture mentality. Yet, it cannot be denied that, today, even the happy few live wholly different lives than their ancestors.

Couture certainly carries antique, probably ancient, values, but there are compelling ways to root them in the present and not in the history books. Not to mention the fact that, while in the past a woman buying a couture dress wanted simply to look like a beautiful woman, today she wants to look younger: more mademoiselle than madame. Yet there were far too many madames on the Parisian catwalks. Chanel is a case in point. The jeune fille en fleur theme felt delicate and fresh, but Karl Lagerfeld's vision of a young woman in the garden, despite the incredible technical wizardry that went into making of the fabrics and decorations, felt like it belonged to fifty years ago. The princesses who buy Chanel Couture probably appreciate this, so the collection will surely be commercially profitable. Nonetheless, it lacked modernity and felt stuffy and tired.

Giorgio Armani has always fought in the name of modernity. After all, it was “The King,” as he is affectionately known, who gave emancipated women in the workplace a new uniform. In this way, couture has always been an odd presence at Armani, but one that makes sense mostly because of the designer's ongoing liaison with the red carpet. This season, Armani was in good form with a very feminine look, lots of puffy short skirts, but it was the faultless pantsuits that opened the show which really registered. It would have been interesting to see them carried in new directions and explored a bit more. 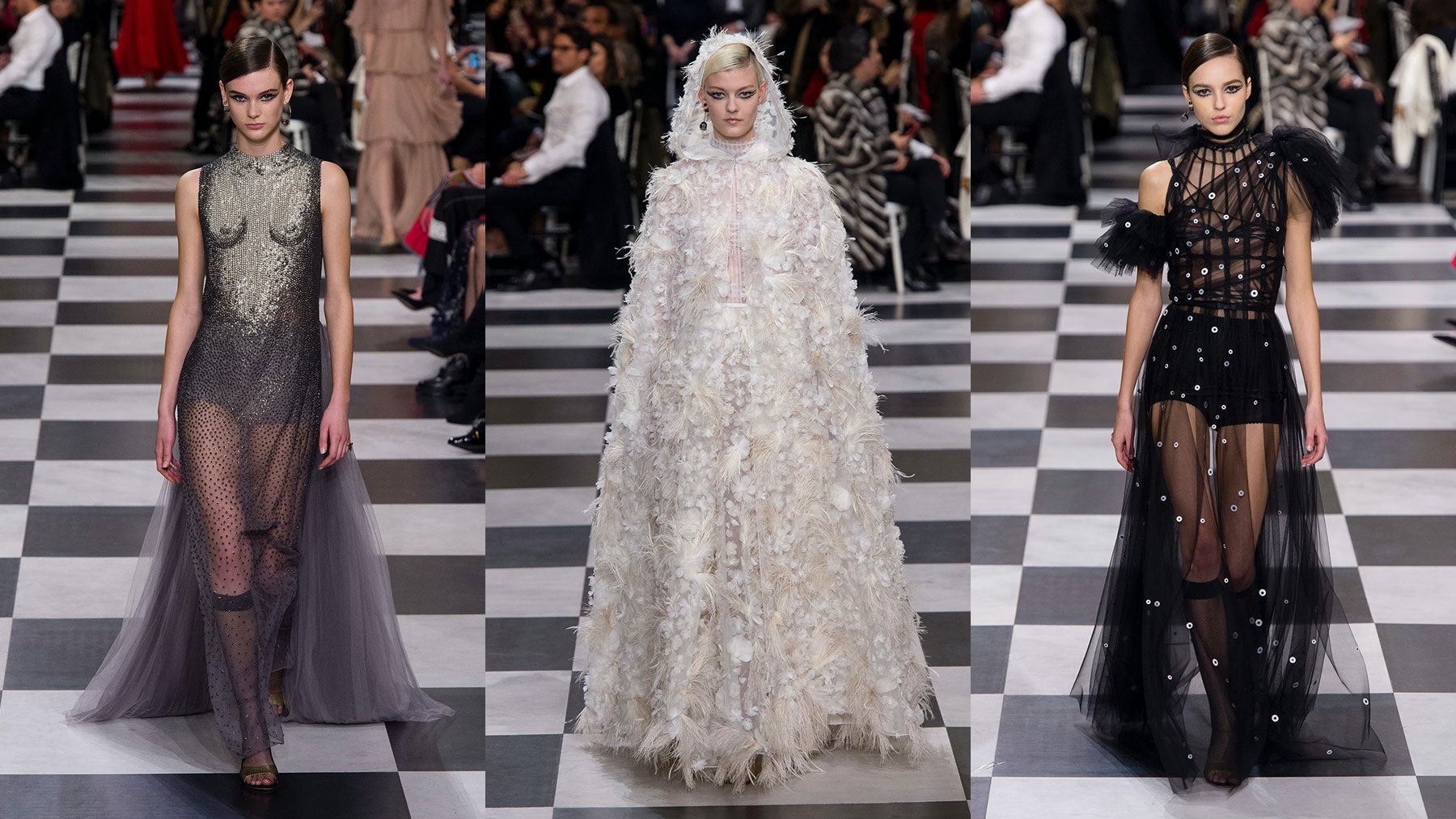 At Dior, a maison devoted to the jolie madame since the inception, Maria Grazia Chiuri was feeling restrained and conservative, despite having chosen a surrealist theme. The outing proved average and not particularly imaginative. Certainly, it lacked the grandeur required by both the house of Christian Dior and by haute couture: a problem Chiuri has had since the beginning and that she needs to fix. 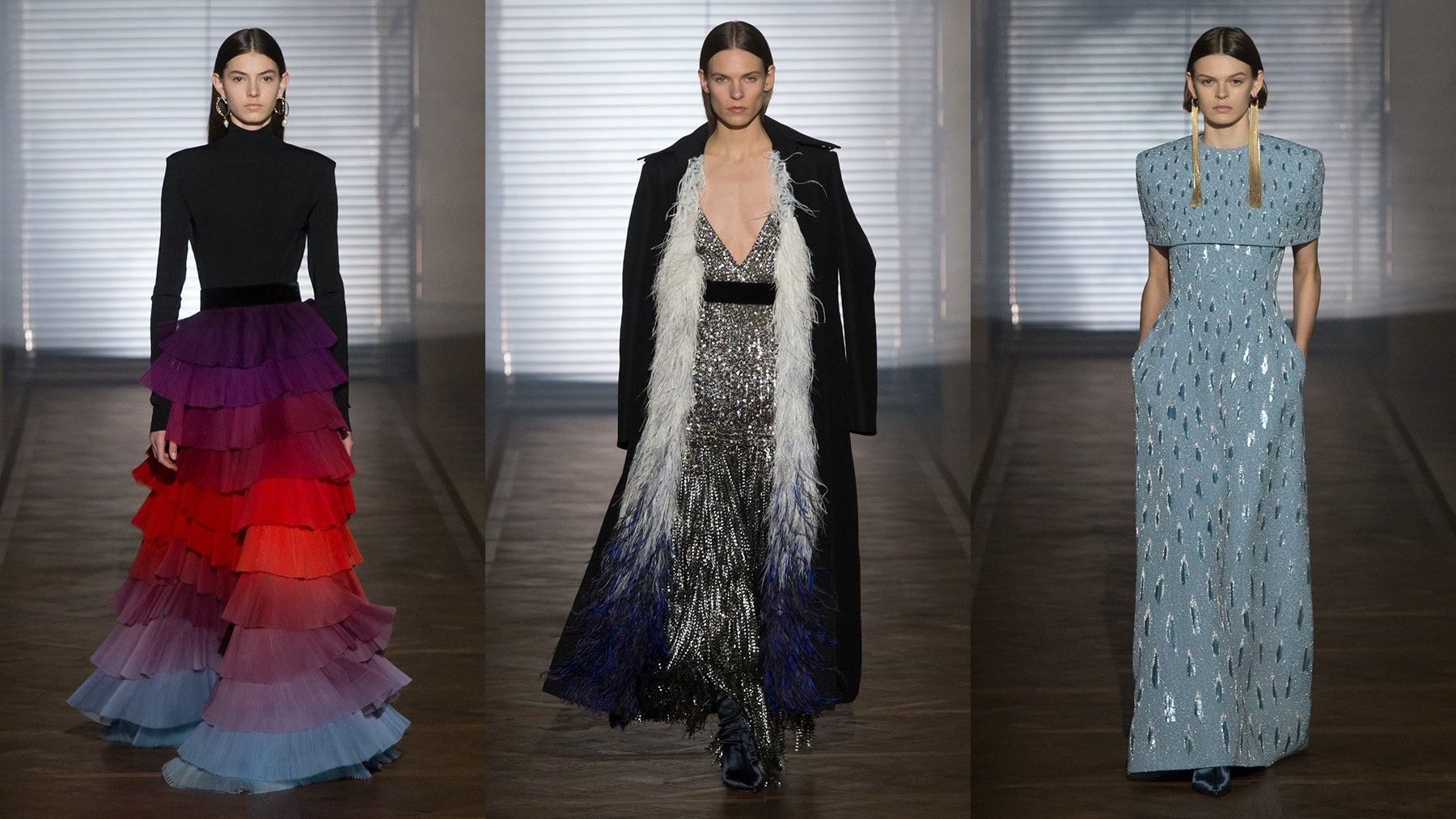 Things got a tiny bit better at Givenchy, the revered French house, now under the creative direction of Clare Waight Keller. Her couture collection, shown in a darkly lit room at the National Archives for an incredible moonlight effect, was a recapitulative opus that went from Hubert himself’s impeccable French chic to Riccardo Tisci's sense of drama and everything in between. There were far too many references going on at once, from monastic tailoring to sensual latex, and as a whole the collection lacked focus. Yet, it had glimpses of modernity, especially in the cleaner day outfits, that were missing elsewhere at couture.

They were certainly missing at the camp festival Jean-Paul Gaultier threw under a hommage à Pierre Cardin theme, for instance. After all, it takes guts to conjure modernity while regarding tradition. In this sense, Pierpaolo Piccioli, creative director of Valentino, was an absolute winner: what he keeps doing for the Roman house, especially with haute couture, is outstanding for its soulfulness, craft and authenticity. Piccioli is probably the sole modern couturier alive because he takes couture for what it is: essentially a service, whose aim is to build a wardrobe for all occasions. The couture he designs is dreamy and intensely poetic, but he is not an advocate of couture as a dream. 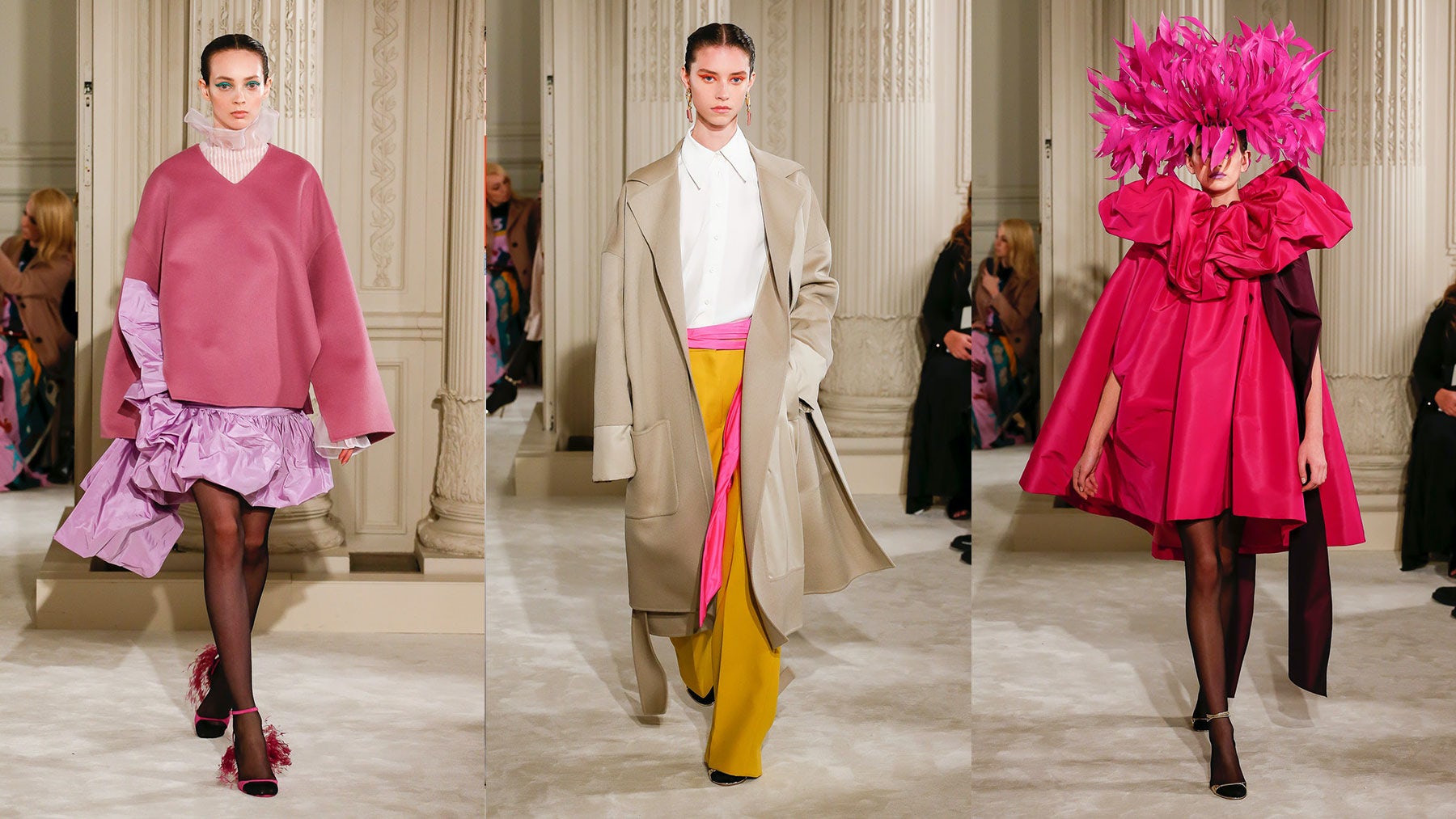 This season, Piccioli surpassed himself with a collection that touched upon the collective imagination of couture. There were tropes culled everywhere, from Charles James to Mr Valentino himself to Roberto Capucci — and he gave his pieces a resolutely modern spin by working on the technique, making it all light and impalpable, both literally and metaphorically. The result was a series of exquisite outfits that made perfect sense for today while honouring the memory of tradition. 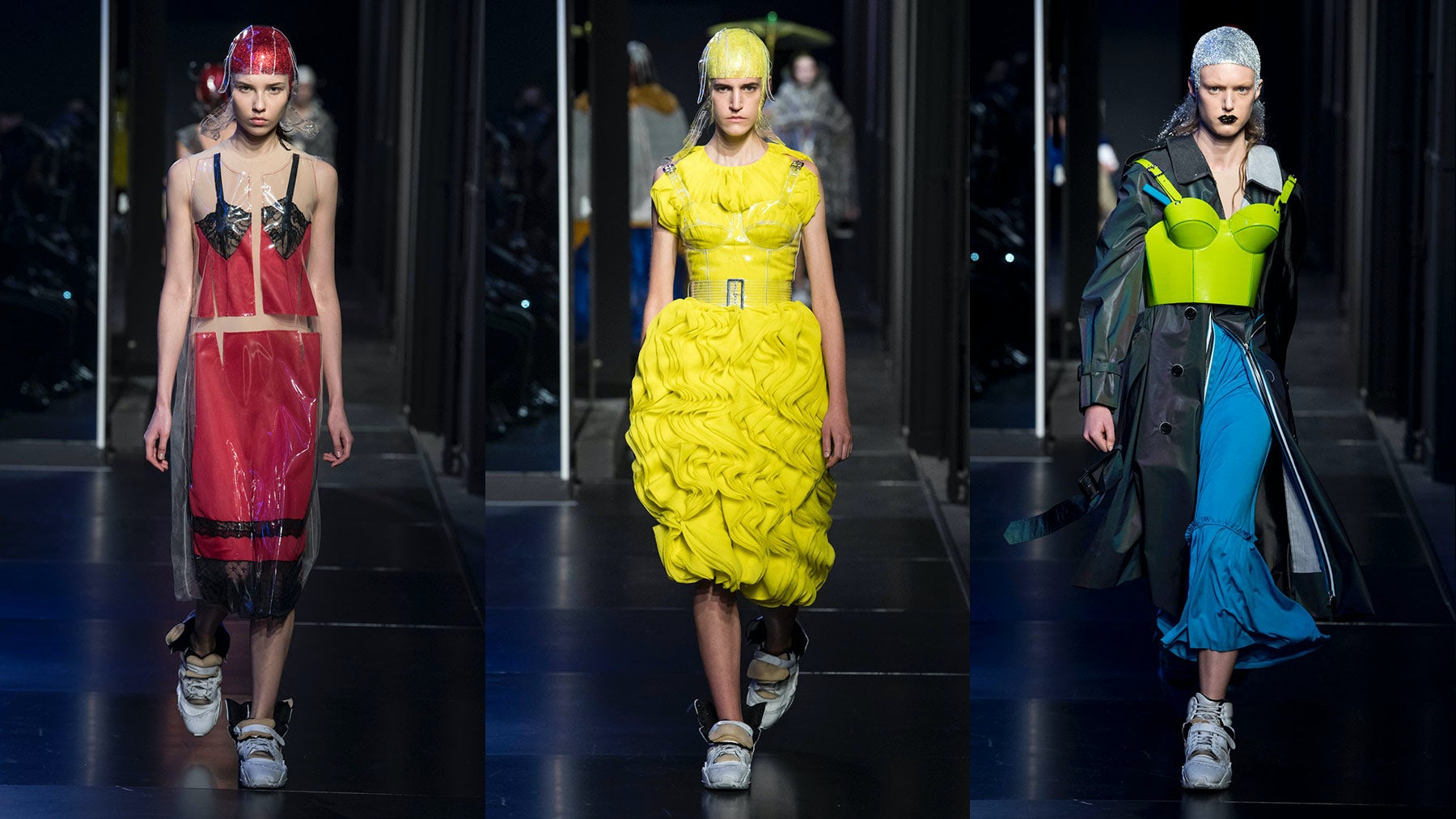 Compared to such a poignant sense of reality, the phantasmagoric Maison Margiela outing was a wonderful step into the virtual. John Galliano, in top form, worked with light-reacting materials and a galactic silhouette that seemed to be designed by a child. Playfulness and speed were pervasive and it all translated into a jolly, uplifting outing. Yet, couture interpreted in this way is just a playground for wild ideas that will need a lot of taming to translate into real clothes. Which, of course, brings us back the beginning. Galliano's idea of couture is certainly modern in terms of shapes, colours and material, but it also seems to be designed to live in a fantasy parallel world. Instagram, maybe, as the camera flash activated fabrics suggested. Which, then again, is extremely modern. You decide.

A bunch of ready-to-wear labels infiltrated the couture calendar again this season: Acne Studios, Ellery and Proenza Schouler, whose vision of modernist bohemia stood out. The juxtaposition of these collections and the couture shows served to highlight both the industrial nature of ready-to-wear and the anachronism of couture. But it’s difficult to judge them together, because the parameters are completely different. Though perhaps this is just another sign that couture — as a calendar, in this case — can be modern.