For her final bow, the designer turned out a playful lineup that nodded to her signatures without feeling stale. 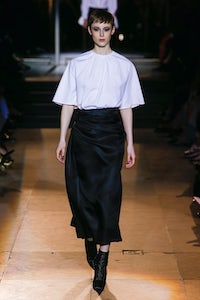 For her final bow, the designer turned out a playful lineup that nodded to her signatures without feeling stale.

NEW YORK, United States — Want a primer on making a graceful exit? Look no further than Carolina Herrera, who showed her final collection as creative director of her namesake label on Monday night underneath an expansive Joan Miró mural in the Museum of Modern Art. Herrera will stay on as the company’s global brand ambassador, but next season Wes Gordon, who’s been working for her since shuttering his own line a few seasons ago, will be the one to emerge at the end of the runway.

Tonight, however, was Mrs. Herrera’s night, and she wore her exit as gracefully as she does a crisp white shirt. Instead of whipping out a greatest hits collection, the designer offered something new, with details that nodded to her past without feeling like a played-out homage.

Herrera started bang on with a pin-tucked white blouse and black silk gazar skirt — a slick take on her defacto uniform — swiftly moving on to fil coupé secretary dresses in shades of blood orange and turquoise right into cocktail hour, where she proposed a zippy one-shoulder dress in animal-print jacquard and an ultra-fitted, strappy style with yellow polka-dotted black tulle artfully draped across the body. The muppet coat — made of a beautiful mess of orange ostrich feathers and metallic ribbon — may have been pegged as the evening’s fireworks moment, but it was the sensational off-the-shoulder gown in power-red taffeta, molded into a sweetheart neckline, that stole the show.

For the grand finale, Herrera sent out a string of models in her signature white collared shirt paired with taffeta ball gown skirts in a range of cheery colours, each cinched with a wide belt. It's a shame she didn't ask the models to smile, just as the audience did when Herrera took her final bow with her atelier. It was emotional for all the right reasons.