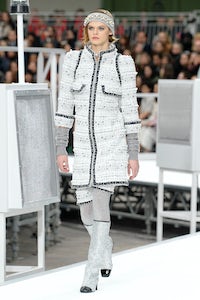 PARIS, France — It became a running joke. After Chanel built airport terminals, restaurants and supermarkets inside the Grand Palais, shipped massive icebergs and forests across Europe, flew planeloads of people to far-off lands in the interests of creating a halo around the brand, the final frontier for Karl Lagerfeld could only be space.

Not for himself, mind you. He said he’d get claustrophobic in a capsule. Space came to him as an inspiration more because he is a connoisseur of the zeitgeist. France is infatuated with Thomas Pesquet, the local boy who is currently ensconced in the International Space Station.

Besides, what person who’s spent any time reflecting on the state of things isn’t hankering for an off-world experience right now? “It’s not that great down here at the moment,” Lagerfeld agreed. Space isn’t only the final frontier, it’s also the great escape.

So a huge, real-looking rocket anchored the catwalk. Gabrielle Chanel Agence Spatiale sponsored the space probe. The rocket’s codename was PAP-AH-17/18. According to Karl,it took six months to build. Granted, he’s no Elon Musk but we could expect some kind of lift-off with that investment of time and and (you know it) money. And we got it. The thing headed skywards at the end of the show, in a blast of very convincing sound and fury.

The audience’s phones-aloft reaction was no surprise. The world is full of wonder but, as Lagerfeld sagely observed, “People become worse and worse, they see only the screen. They don’t see the world anymore. And I don’t know if they see space."

So he gave them shock and awe. What a shame he couldn’t give them a collection to match. “They’re very modern clothes for today,” said Lagerfeld. “Nothing to do with the childish clothes of the 1960s, when we thought we would walk in white on the moon.”

The pivotal modernity might have been the tricky stand-up collars, or the culottes which converted to a minidress, and back to pants, said Lagerfeld, “if you were riding a bike”. He was impressed by his own practicality. “We took off to space, but I’m the most down-to-earth person.” But as usual, there was much too much of everything else.

How would you ever begin to edit Karl Lagerfeld’s profligacy? That’s the very definition of a thankless task, partly because the too-muchness is usually wrapped around appealing notions, like the glittery tweeds here (“Very démodé to think sparkle is only for nightclubs,” said Lagerfeld.) They were pearl-trimmed for a dressier look. The silvery astronette pieces and astronaut prints were another story, undone by their literalness.

Elton John’s Rocket Man played as PAP-AH-17/18 went up. Kraftwerk’s electronic lullaby Ohm Sweet Ohm was on the soundtrack as it came down. So melancholic. “No, no, melancholy’s not my specialty,” Lagerfeld scoffed. “Now we have to do the next one.”

He said he knew what and where, but he wouldn’t tell.