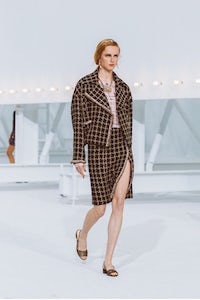 PARIS, France —  We know Hollywood’s in trouble, the pandemic is walloping the global box office and James Bond is delayed again. Who will save us now? Well, Virginie Viard and her team of dreamers rolled up their sleeves on Tuesday and gave us a collection from Chanel that could be coloured as an oblique reminder of why we love — and miss — the movies. She said she’d been thinking about the actresses “who make us dream so much,” three in particular who had a close connection with the house. Romy Schneider, Anna Karina and Jeanne Moreau all turned up in the show teaser, a magical little film by Dutch photography duo Inez and Vinoodh.

It opened on the Hollywood sign reconfigured as a giant C-H-A-N-E-L, before skimming across the Hollywood flats, diving into a Hollywood pool (up popped Romy in a scene from “La Piscine”), soaring over the Hollywood Hills… And there, on the other side just where you’d expect to find the Valley, was PARIS! Then the camera zoomed upwards and it turned out we'd been inside the Grand Palais the whole time. The art of cinematic illusion was distilled into one perfect 90-second package.

The collection itself could have done with a bit more of that magic. “LUMIERE,” a directorial male voice yelled to initiate the show, but Viard’s salute to what she called “a whole unconscious that’s linked to cinema” focused less on the glamour of the movies and more on the kind of subliminal assurances they can offer. In other words, there was a casual easiness to the clothes that you sensed was probably closest to Viard's own heart: big soft shoulders, fluttery dresses, airy tweeds slit up one thigh, wrap dresses and skirts. Nothing too structured. Her post-show notes claimed joy, colour and vibrancy as her goals. There was a hit of that rah-rah-ness in neon t-shirts (C-H-A-N-E-L picked out in rhinestones) paired with black satin shorts. And the pink Bermuda short suit and the pedal-pushers also had a kooky kick. But highlights were diluted by that perennial Chanel problem: there was too much filler.

Mind you, Viard had to do something to fill that space. Maybe that was always the challenge for Karl as well. Just when I was thinking Viard might be dialling down the extravaganzas of the past, Tuesday’s set recreated the sign from the Inez and Vinoodh teaser and stuck it in white salt flats, like a massive movie set in the desert. It looked like a defiant business-as-usual statement, pandemic be damned! Which is possibly why there was also a steady stream of logo-ed reminders throughout the show that, yes, you were watching — and, fingers crossed, would soon be wearing — CHANEL! That said, the trio of longer, more formal looks at the finale, with the letters of Coco’s name slightly abstracted, was lovely. And a black tweed suit, belted at the waist and paired with an ivory blouse, suitably summoned up a sober yet sensual vision of Jeanne Moreau, with whom Chanel herself loved to spend hours lounging around and talking about books. But not movies.