A Pick-Me-Up Prescription at Chanel

There was such a zest in this collection. “Paris Cosmopolite” was the name Lagerfeld gave it. A neologism that said it all, really. 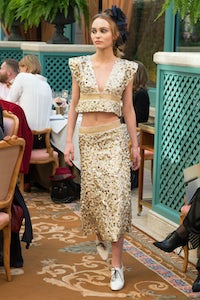 A Pick-Me-Up Prescription at Chanel

There was such a zest in this collection. “Paris Cosmopolite” was the name Lagerfeld gave it. A neologism that said it all, really.

PARIS, France — "It’s what we need now, no?” Karl Lagerfeld mused after the Chanel collection he showed in Paris on Tuesday. And if by that he meant that the looks he offered were a pick-me-up prescription for a world on a downer, he wasn’t far wrong.

Admittedly, the style of presentation had a lot to do with the uplift: with three shows in one day, the models were quite refreshed by the third time they were called upon to weave between tables set up in the ground floor public spaces of the recently reopened Ritz.

And the audience for the evening show, well lubricated with fine wines (the St Emilion Grand Cru from a vineyard owned by the Wertheimers, proprietors of Chanel), responded in kind. Michel Gaubert laid down a goodtime Parisian soundtrack that took him back to his days dj-ing at Le Palace during the fever dream of disco.

It felt like Parisian good times were exactly what Lagerfeld wanted the collection to evoke. This was his annual celebration of the house’s Métiers d’Art, the artisanal studios which provide the textures and details — embroidery, feather-work, buttons, beading and on and on — that are a USP for Chanel. In the past, these celebrations have taken place in far-flung locations with a connection (often tenuous) to Coco herself: Rome, Dallas, Edinburgh, Mumbai? No such issues with Paris.

The Ritz backs on to Chanel’s Rue Cambon HQ. She herself famously lived in the hotel. It wasn’t hard to picture Lagerfeld’s relief at such an indissoluble connection. At last, he wouldn’t have to travel to the back of beyond to stage a show. And Lord knows he’s earned a night in. Why, he could practically walk home if he felt like it. Maybe that’s why there was such a zest in this collection. It sparkled, it lilted, it heaved huge relaxed sighs. “Paris Cosmopolite” was the name Lagerfeld gave it. A neologism that said it all, really.

It was that backstory — Coco, Cosmo, Paris – that gave the collection its spine. Lagerfeld idealised it a little. After all, this particular bio has as much shade as it does light, which calls on the chroniclers of Chanel’s life to dance around some of her shadier affiliations. But there was no darkness here, unless it was in the long, frothy dress under Natalie Westling’s puffa jacket, or Lily Rose Depp’s clingy cocktail number.

Broad shoulders and pencil-skirted silhouettes echoed the 40s; big, slouchy knits felt like sweater-girl faves from the 50s; a black leather jacket and matching pants had a tough 70s flavor. And there was a layer of 80s excess in the gilding. Lagerfeld’s “cosmopolite” clearly era-skipped with ease.

But there was something reassuring about the fact that the collection’s best looks were still the ones where Karl applied himself to classic Coco: the tweeds that dissolved into frayed fringing, the bouclé shot through with gold, the lean, fitted looks with an abundance of fabulous trim to highlight the craft of Chanel’s ateliers.

And in this show, it was a man who wore Chanel’s pearls. OK, so it was Pharrell. He also had a little cap of hair woven with gold. But wasn’t that a sight to lift us from our slough of despond?