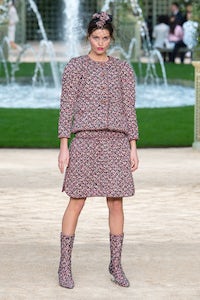 PARIS, France — “It’s apparently a big success,” Karl Lagerfeld said of the beard he’s been growing since Christmas. It’s a throwback to the prodigious facial hair he had in the 70s, “but only for two or three years because in the end, it was itchy.” The beard’s return means it takes 15 minutes less to get ready in the morning. “And minutes are priceless,” added Lagerfeld, which was hardly a surprising statement from a man who seems compelled to cram every waking second with something.

On Tuesday morning, that something was his latest haute couture collection for Chanel. Its prettiness was the yang to the yin of the Métiers D’Art show Lagerfeld staged for Chanel in Hamburg in December. That was solemn, moody, darkly seductive. He described it as his “Hanseatic tough side." This was bright, colourful, sparkling. “From the tough to the sweet,” Lagerfeld said. The models’ cheeks were touched with blush, their lips pinked, their heads crowned with posys. The dichotomy was deliberate. “I didn’t want people to see the same thing again."

Prettiness isn’t a word you’d imagine Lagerfeld being particularly happy with, erring as it does on the side of bland. “But I wanted this to be pretty,” he insisted. A French spirit, he called it, in keeping with the country’s optimism after Macron’s election. But he also insisted that only an outsider would be able to get away with such a statement. “It would always be patriotic bullshit if it was done by a Frenchman.”

But, nationality – and patriotism — aside, there also aren’t many designers who would have Lagerfeld’s vast repertoire to draw on for his celebration of French joie de vivre. Hamburg’s success partly rested on a distinctly adult POV. This collection initially felt jeune fille by comparison, with its candy-crystalline tweeds curving over hips, its slash-pocketed jackets and skirts (which encouraged a hands-in-pocket slouch from the models) and its princess coat silhouettes. It evolved. The silhouette narrowed and lengthened, then skirts flared from dropped waists. Black, emerald and cobalt blue momentarily sharpened the sugary palette. Lagerfeld mentioned the need for a drop of poison. The pastel airiness reasserted itself for the finale, barely dodging sugar shock.

Conceived in post-Macron bliss though it may have been, Lagerfeld agreed that the collection was also an antidote to the sour turn the rest of the world is taking, with his added caveat that the kind of escapism offered by a Chanel couture collection is available only to the tiniest stratum of society. He sounded sad when he said that, which is the kind of moment that makes you wonder what is really going on in his mind. “I’m Jekyll and Hyde,” he said, by way of possible explanation. “But I’m at ease with both.”