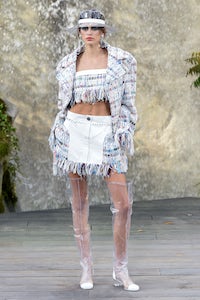 PARIS, France — Karl Lagerfeld loves waterfalls. He finds the ozone in the air around them particularly invigorating. “The healthiest thing in the world,” he called it, after a Chanel show which was staged in an 85 by 15 meter recreation of the Gorges du Verdon, a spectacular natural beauty spot in France’s Midi. Rock walls soared towards the dome of the Grand Palais, water cascaded in a roar over them. The entire impossible mise-en-scene was, we were assured, environmentally conscious to the last drop.

But it wasn’t his assurance. Lagerfeld always shies away from pinning down what he does. The very thought of the Grand Statement leaves him stone cold. So, when the idea of sustainability, a hot fashion ticket, was raised in relation to his latest offering, he said simply, “It’s just what it is. I liked the idea of water, of lightness.” And not just water, but also water-proofing. The collection was a paean to plastic, from the classic Chanel boater all the way to footwear. The camellia on a handbag was plastic. Other handbags had their own raincoats. Rain hoods accessorized tweed suits. There were dressier pieces that looked like thickets of plastic filaments. And a clear plastic cape was artfully fringed, highlighting Lagerfeld’s respect for the material. “It’s not cheap like it used to be.”

That could have been his natural perverse playfulness. On the other hand, if he wanted to make a collection about water and lightness, what better way to convey the effect of clothes viewed through a shimmering aqueous curtain? It didn’t stop there either. Lagerfeld shot plaids with lurex, scattered sequins over suits, giving the clothes a sparkle that, in this context, could have been drops of water. And a watery flou shaped a handful of draped silk jersey pieces.

There was the usual question at show’s end. Lagerfeld showed much too much. Why? It was obvious which elements in the collection engaged his attention, as obvious as it was when considerations other than creativity took over. He is adamant that his word is first and last at Chanel, so it would be thrilling to see him set himself some limits. Good lord, he dropped Spinoza into the post-show conversation on Tuesday. You could only imagine the fireworks that could result when Spinoza’s discipline infiltrated Lagerfeld’s profligate, dream-nourished creativity.