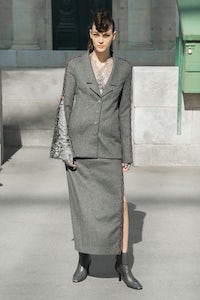 PARIS, France — The world knows Karl Lagerfeld is famously a hard worker, but he insists his job is never a chore or a bore. On Tuesday morning, as he laid to rest one more Chanel spectacular, he said he preferred the notion of “chic leisure” to hard work. “I love what I’m doing and I do it in the best conditions in the world,” Lagerfeld rhapsodized. “I don’t even know how lucky I am.” Though the couture collection he’d just showed suggested he was quite aware of his good fortune. Its shimmering lustre made me think of all things silver: silver linings, silver moon reflected in water, silver spoons, like the ones in the mouths of a fortunate few when they are born. Was Karl one of those so blessed? “For sure!” he exclaimed instantly. “It made life easier because you never had to fight.”

That's all part of his playing down the effort required to sustain a career such as his. So is his steadfast refusal to go deep. The show opened with a series of elegant, elongated suits that zipped open up the arms and up one side to reveal shimmering linings, a short underskirt, and as much arm or leg as the wearer felt comfortable with. “I’m surprised that in 35 years of doing Chanel I never thought to use a zipper like this,” Lagerfeld mock-berated himself. The idea imbued the clothes with the movement of shifting silhouettes. But it was also a provocation, a teasing hint at an inner life that might be different from what’s visible on the surface. Too deep for Karl.

“I’m not a merchandiser who invents big speeches,” Lagerfeld said. “I do it because I see it, I feel it, it’s my instinct. I have no storyboards, I can explain nothing. It comes like this. I could give you tons of words because I’m good with words but for me, it’s much simpler.” As simple and inexplicable as a dream, in fact, which is where the zippers came to Lagerfeld, as most of his best ideas do.

But if the clothes came from dreamland, the show was rooted in real life, specifically the view from Lagerfeld’s apartment. He looks out over the Seine, lined with the stalls of “les bouquinistes," the vintage book and magazine sellers who are a Parisian institution, and where, when he first arrived in Paris, he would browse for hours. “You could find treasures for nothing,” he remembered. Lagerfeld actually faces the Louvre. “But I couldn’t take that because LVMH has a contract with the Louvre, and they’re French.” So he had to make do with a simulacrum of L’Institut de France, another magnificent Parisian building.

The scale of the backdrop may have been as huge as ever, but the fake quasi-side felt oddly intimate, with its convincingly shabby little bookstalls. Kind of like couture – you spend a fortune for something that only you can fully appreciate. And that dialogue – decorum versus showiness – was woven into the collection. The lean, long grey suit versus the pouf of a silver peplum, sleek bolero versus puff sleeves, delicate clouds of mousseline versus the clunky bulk of a silver skirt that looked like it had been hand-knitted by a giantess. Sam McKnight’s hair design captured the dichotomy – full rockabilly quiff on top, sleek little ponytail in back.

That hair had a hint of pomo-futurism. So did Michel Gaubert’s soundtrack, and Adut Akech’s wedding outfit at the finale. There was always a melancholic tinge to post-modernism, which made me wonder if onwards-and-upwards Lagerfeld ever feels melancholy when he looks out his windows at the Louvre, the Seine, the bookstalls. They’re the past, his own as well as his city’s. Time to reflect? Nah! Lagerfeld saves reflection for the sparkly effects in Chanel tweeds.