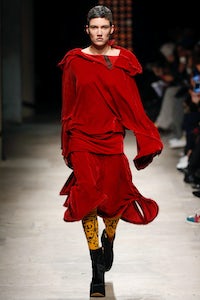 PARIS, France — Fashion has a strange relationship with individuality. Because sometimes what is seen as unique is expressed by a group, or tribe, as fashion people like to call it.

With new tribes and their scenes fuelling the fresh energy here in Paris, it was interesting to observe the parade of outfits at Vivienne Westwood, who is of course the original radical. Earlier in the day an editor remarked that the Westwood legacy is all over fashion at the moment (see Vetements).

At the show, there was a Vetements moment, too, as oversized shirts with elongated sleeves appeared on the runway, but instead of being part of the wardrobe of disaffected youth they looked like they belonged more to the land of flamboyant dressers.

This was the first Westwood womenswear collection to which the name of Andreas Kronthaler was officially attached, a fact driven home by electronic signs spelling out AVWK and VAWK respectively (the initials of Kronthaler and Westwood). Backstage Westwood and Kronthaler both stated that his take on fashion was more spiritual (or “more in tune with cosmic forces,” as Westwood said). Kronthaler also said he’d wanted to make the collection more personal, taking his starting point in Sharon Lishman, a friend and former co-worker who had subsequently become a Buddhist and who visited the Westwood-Kronthaler household over Christmas. As it turned out, she had made and dyed new garments for her visit in London and to Kronthaler this was a wonderful testament to the power and beauty of vanity.

“Vanity is something positive, it’s an instinct,” Kronthaler mused. When asked how this squared with the environmentalist message of the Vivienne Westwood label, he suggested that people should only buy the things they really want, waiting a day between the initial impulse and the actual purchase (This made sense as it isn’t vanity per se that is the root of fashion’s environmental problem, but overconsumption.)

There was definitely a spiritual vibe to the collection, as 'OM' was written on a veil covering one model’s face and the first few looks came in colors of the robes worn by Tibetan Buddhist monks. Things soon digressed, however, and it was quite difficult to follow the designers' train of thought (this reflected in the show notes which juxtaposed Sharon Lishman with Kronthaler clearing out his father’s house, Brueghel and his friend Iris’ Christmas tree costume).

Some parts of the collection were a bit too much, like the mitres with tails, but the main problem was an over-styled costume-y feeling, a fact hammered home when Vivienne herself appeared on the catwalk after the finale in a jacket and mismatched stockings from the collection.

In a way, the show was a parade of individuals, rather than a tribe. Indeed, the collection made for a slightly confused whole, but taken on their own, the individual pieces made more sense. And when a perfectly conservative, dusty pink knitwear ensemble came out just before a man wearing high-heeled platform shoes, it showed an affinity for the old Westwood truth that subversion comes in many shapes and forms. If we are to see this as a first step in the brand’s succession plan, there’s no reason to think that Kronthaler won’t be able to continue the legacy. 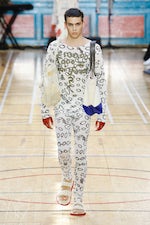 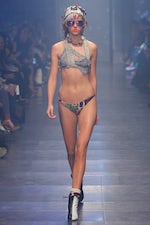