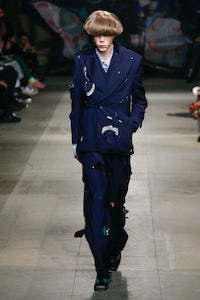 LONDON, United Kingdom — Like every misfit ever set upon by bullies, Charles Jeffrey clenched his fists and swore, “One day I’ll show the bastards!” That’s just what he’s done with his career to date, culminating in the trophy for 2017’s Emerging Talent at the recent British Fashion Awards, presented by John Galliano, one of his heroes. But Jeffrey escalated his vengeance on Sunday night with a show called TANTRUM! in which every morsel of anger he'd ever felt “growing up gay in a straight man’s world” (the subtitle of his inspiration, Alan Downs’s 2005 book "The Velvet Rage") was spewed onto a catwalk pulsating with the barely contained chaos of longtime collaborator Theo Adams’s dance troupe, egged on to dementia by a live drummer furiously pounding along to the Prodigy’s "Firestarter". It was a calculated risk. Would the theatrics amplify the intent, or distract from it? No chance. As Jeffrey himself said, “Anger is an energy.” And here, it was transcendent.

It felt like a show – and a collection – in which Jeffrey grew up. His signature has always been a carefree pagan frivolity, the spirit embodied in his LOVERBOY label. Nothing remotely wrong with that, but, as he noted, “There’s a dark side as well.” And here, he addressed it with a fierceness you could sense in the mutant tartans, in the tailoring ripped with rapier tears, in prints that were alternately Pictish and Pollock. But it was polished! There was a peculiar formality in the exaggerated silhouettes. Jeffrey claimed the wasp waists of Charles James and Christian Dior as a reference. Even the occult quality which has always nibbled at the edges of his work was elevated with a mage-like guest appearance by panda-eyed Faris Badwan, lead singer of the Horrors (another of his idols) and a last passage featuring a black angel, with a huge, spooky target on her chest. Jeffrey’s affection for the pagan ritual resurfaced in his finale: a boy with a fragment of a lost civilization balanced on his head, shepherded to sacrifice by a couple of harpies. Dark side indeed. A Gaelic walking song thrummed ominously in the distance.

This is the side of fashion in London that outsiders have always been drawn to, where clothing and concept are married in one extravagant happening. Jeffrey stands out as a natural heir to past masters of the form because he so effectively balances both, and more so now than ever before. We need him.