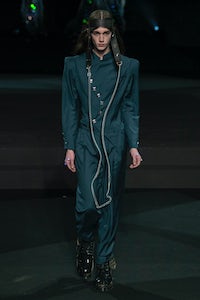 LONDON, United Kingdom — Simon Costin, set designer extraordinaire and long-time ambassador of the arcane, gifted Charles Jeffrey with a huge Druidic tree stump as the backdrop for his Loverboy presentation on Saturday night. The stump was baubled with CDs and lit with a disco ball, a perverse synthesis of worlds ancient and modern. As such, it was the perfect complement to Jeffrey’s collection, which featured his by-now signature blend of pagan excess, exuberantly colourful sportswear and clothes carefully crafted in a genre the designer referred to as localised couture, in that the panniers, the corsets, the bias cut silk dresses and canary-yellow frock coat were produced by local artisans rather than the craftspeople of a far-off land.

After the show, Jeffrey said working on the collection felt like designing something for a movie. He’d certainly given himself enough back story, on one hand, an old pagan ceremony in the Orkneys called the Festival of the Horse, on the other, Scottish artist John Byrne’s paintings of extravagantly-coiffed teddy boys. He imagined the two inspirations meeting in a surreal dance. Horse brasses decorated jackets and shoes, models sported huge coloured teddy boy quiffs. (Hair stylist John Vial had his hands full with this show). One Byronic pin-up in a poet shirt and a tartan paperboy cap trailed a boa made up of old horseshow rosettes.

But Jeffrey’s comment was telling. As the presentation unwound, a division as distinct as that between an Orkney nature-worshipper and a Glaswegian teddy boy became apparent. Simply put, it was the tension between clothing and costume. The resolution of that tension is Jeffrey’s ongoing challenge, as it was for Galliano and McQueen, his most obvious forerunners. His Loverboy-branded knits are a hit. So are his tartans, and his idiosyncratically tailored coats and dresses. (Did I see a magic mushroom dress?) But the intrusion of a Miss Havisham-like sprite in a stained hoopskirt struck a discordant note. And then the handful of tree-worshippers who’d been performing their gentle supplications in the centre of the catwalk throughout the show broke into a frenzied Suspiria-like dance that appeared to dissolve into utter despair.

It’s not the first time that furious physicality has fired up a Loverboy finale. Perhaps the elements of performance and costume exist to remind us that Jeffrey has much more on his mind than fashion. The thought was enough to send me scurrying back to his shownotes (a highly detailed Manifesto for Conscious Practice and an elaborate exposition on the clothes… Charles loves words!) where I read that, for all its energy and moments of beauty, he imagined his presentation as a curse on the generations who have bequeathed environmental catastrophe to the present and future. That existential dance between worlds ancient and modern that he had conceptualised was actually a dance of death.

I originally read the show’s title as HE’LL MEND YOU. Reassuring. But I was wrong. It was actually HELL MEND YOU. And there’s not a snowball’s chance in you-know-where of that happening. So welcome to 2020, “the broken future” in Charles Jeffrey’s mind.