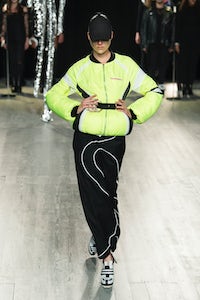 LONDON, United Kingdom  — A hybrid being stretches out on the catwalk, wired to a fibrous superbrain suspended above the catwalk. It is “extracting consciousness,” according to the seductive android voice floating in the ether. A black-clad choir emerges, heads cased in tinfoil helmets to repel any attempt at alien mind control. The soundtrack pulses, roars, soars. We have lift-off. Welcome to Charles Jeffrey’s “sci-fi Xanadu," his “post-gender Shangri-La."

It was a marked contrast to last season’s extraordinary psychodrama. There, dark, riddled with despair. Here, light, elated. In the intervening months, Jeffrey has discovered physical fitness. He began running, not from himself, which may once have been the case, but towards the bright future he wants to guarantee for the rest of his life. “It’s my first time looking after myself,” he enthused. It’s usually galling for the physically unmotivated to behold the messianic glow of the newly fit, but Jeffrey insisted, “Running’s the same as dancing,” a ringing endorsement from the king of the fashion disco bunnies. He claimed exercise has quickened his thought processes, made him newly sensitive to the body – and also more sensitive to a core clientele. “I’m learning a lot more about trans people and their relation with their bodies.”

As far as the new regimen went, there were nods to fitness in a padded cycling jacket, paired with a slinky black skirt. There was a slightly rococo tracksuit and some very sporty knitwear. And there were shoes that looked like a Constructivist revision of Mercury’s winged feet (an elegant riposte to the current rage for sneakers on steroids). Pair them with Loverboy kneehighs (just writing those words makes me happy) for maximum gymness.

But much more significant, for all his newfound appreciation of the transformative impact of exercise, was Jeffrey’s rejection of body fascism. Loverboy’s embrace of everyone, everything, everywhere stood strong and tall…or short or scrawny…whoever or whatever you are. Jeffrey can’t help himself. Even in the midst of last season’s darkness, there was a spirit of rampant celebration. That spirit is deeply, physically pagan, and it links Jeffrey to London’s other great avatar of fashion paganism, Vivienne Westwood.

She lived again in Jeffrey’s toga drapes, collaged tartans and bias-cut pinstripes. There was even a mini-crini, though the attenuated Dr. Seuss stripes it went with felt more like Body Map’s Cat in the Hat. These cross-references are merely to establish a rich lineage for Jeffrey. History aside, he’s perfectly capable of hewing his own path. One of the best pieces in the show was a crocheted vest of hands squeezing a nubile Adonis’s torso, a kind of crude, funny but fabulous trompe l’oeil. An over-the-top draped evening dress featured two huge satellite dishes. Another full-skirted look floated on space garbage. Jeffrey was taking his paganism off-planet.

He’s very convincing. You can see that in the acolytes who are rising in his slipstream. But with this particular season in London feeling a little bereft, there were definitely worse places to be looking for leadership than Loverboy.