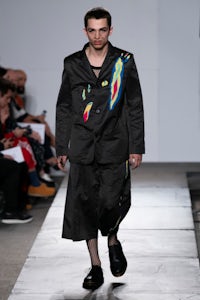 LONDON, United Kingdom — The softly lit stacks of the British Library were a beautiful sight, towering shelves of books glowing gold as a glorious backdrop to Charles Jeffrey’s new show for Loverboy. Earlier in the week, Jeffrey said he thought of knowledge as a kind of armour. Of course it is. It shields us from ignorance, especially in this “peculiarly violent time for the mind,” (cf. the Loverboy shownotes). There were three acts in Jeffrey’s presentation. He himself opened the first, declaiming Dylan Thomas as he walked down the catwalk. “In the beginning was the word…”. Wilson Oreyema opened the second with a poem he’d written “moments before” and Hélène Selam Kleih led Act III with words from feminist poet Adrienne Rich. The disciplined minimalism of the show was a stark manifestation of what Jeffrey sees as the critical next chapter in his career, a turning of the page from the orgiastic theatrics that made him the darling of London Fashion Week.

How does he do that without losing the furious transgressive charge that his clothes, and the way he has showed them, have brought to the fashion stage? That was the challenge Jeffrey addressed on Saturday night. When I spoke to him last week, he was keen to emphasise the new focus on textiles, on technique, on tailoring, on dresses, on ways he could speak to a whole range of customers. He has a real head for business… and a bod for fun. It came through loud and clear in a show that had a disciplined core (those textiles and techniques, along with the appeal to different levels of Loverboy fandom) surrounded by a corona of gorgeous chaos. Jeffrey loves to inject artiness into his work. He was very taken by Arnulf Rainer, a German artist who laid surreal masks of paint over photographs of faces. Lucy Bridge’s makeup, John Vial’s hair duplicated Rainer’s intrusions. And Mike Bovil’s soundtrack was a precision-tooled punk collage, short, sharp bursts of Iggy, the Ramones, the Clash, speed-fuelled classics.

The sound was a signal. In the chaos of now, “while those who govern us publicly falter and fail” (shownotes), Jeffrey considered the spirit of rebellion, and what modern punk would look like. I mean, really, has there been a better moment for an anarchic rejection of the status quo to raise its screaming little head to the darkling heavens? But he sees modern punk differently — less violence, more expectation. You want to take charge? Then justify yourselves! (To which I would add, if you can’t come up with a justification — and you most likely can’t — be ready for the consequences.)

Is that too abstract a notion to translate into clothes? Probably. But one thing Jeffrey offered was a face-off between fashion-y lightness (the Loverboy tartan rendered in a summery seersucker for dresses and jackets, the flou of decorous, back-buttoned silk dresses) and the aggressive deconstruction of inside-out seaming and pieces riven by fault lines of torn cloth (a difficult innovation he’d been able to master with the input of Ventures, the Kolkata-based textile house that a number of European designers have turned to for help in realising their far-flung fabric fantasies). There was a real tension between these extremes, amplified by the skittering punk soundtrack. And that tension didn’t subside with denim looks splattered with a cosmic paint job, or simple shift dresses daubed with gaudy hand-paint. The fishnets and Doc Martens were the finishing touch.

To be fair, a lot of this effect was due to Jeffrey’s styling of his own show. Still, the fury in his work is undiminished by the pragmatism of growing his business. That is what makes him the kind of designer who sustains and fosters the ethos that makes London so utterly, endlessly irresistible.