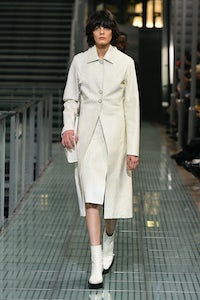 PARIS, France — 1017-ALYX-9SM’s new collection was called Reality Systems. A reality check insists I call it Alyx for the remainder of this review. At least that honours the rigour of the clothes. Matt Williams was part of Been Trill, with Virgil Abloh and Heron Preston. The world mostly knows that, but it’s useful to have in mind as a gauge of how far he has come. Of all the post-streetwear brigade, he is the one who has offered the most defined, polished, individual fashion statement. His latest collection showed why. You can do a lot more with a tightly focused little than doing a little with an over-reaching lot.

Williams said his focus with this collection was elevating Alyx. His not-so-secret weapon was craft. embroidery and tailoring, to be specific. Unlikely though it may sound, a denim jacket and jeans crawling with diamantes worked as a high/low synthesis. An ice-pink suit — single button closing, fingertip jacket — had a chill glamour, an attribute which could equally be applied to the whole collection. When white shirts, black ties weren’t anchoring looks, a similarly formal effect was achieved with a twist of fabric which circled the neck in a noose-like fashion. Coats and jackets were long, high-buttoned, creating a lean, sharp silhouette. There was a suggestion of luxury in white ostrich-textured leather.

The title of the collection hinted at ways to deal with the world. Clearly, a new reality demands new systems. It was intriguing that Williams fell back on tradition but, of course, the most resonant visions of possible worlds — Blade Runner, Gattaca, Dark City — have done exactly the same thing. Where he was most reflective of the now and soon-come was in a model casting that was determinedly non-binary. Nothing remarkable, simply matter-of-fact there.