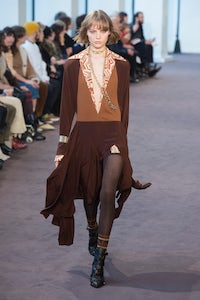 PARIS, France — Natacha Ramsay-Levi’s new beau is a cinematographer and on Wednesday morning, after her sophomore show for Chloe, she admitted she’s become a little obsessed with movies. She mentioned a couple of intriguingly cultish inspirations. In the 60s, Stéphane Audran was the ice queen of French cinema, embodying bourgeois chic so effectively in the films of her husband Claude Chabrol that Luis Bunuel had to have her for his “The Discreet Charm of the Bourgeoisie." Audran wore Chloe when Karl Lagerfeld was the designer, and Ramsay-Levi was keen to explore the ambiguity of her persona: revolution vs. restraint. Or, as the show notes provocatively phrased it: mocking the frustrated desires of the bourgeoisie. Buttoned-up necklines were opened wide in gaping V’s. Skirts flowed in fluid scarf hems. There was a slouchiness in the low-slung belting of a blazer or a scarf-hemmed trench. A virginal white lace dress was cut out at the side. So were the knits, not so much mocking frustrated desires as exposing them.

Ramsay-Levi touched on Chloe’s equestrian heritage with relaxed jodhpurs and the semi-cowboy detailing on an embroidered shirt, but, more than anything, she infused the house codes with a loucheness, not the hippie chick vibe of Chloe in recent times, more the silken, adult seduction of the Parisian club privé habitué. Could be Audran, in other words. This first part of the show backed up her declaration that the collection was more self-assured than her first.

Where the self-assurance wavered was on Part II, where Ramsay-Levi said her second inspiration held sway. Who even remembers a teenage Angelica Huston in 1969’s “A Walk with Love and Death”? (Huston herself would be happy for us to forget.) She played a medieval aristo, and - eyes narrowed, vision fogged - you could see something of that in the embroidered detailing, in the languor, maybe even in the metal armlets that pushed sleeves into leg o’mutton territory. And there were trousers with strange zippers. Maybe it was the romance of the original that drew the designer, but she was on much firma terra with her willing, sinning bourgeois belles de jour.