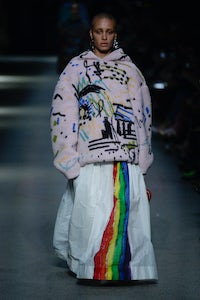 LONDON, United Kingdom — The name that Christopher Bailey gave his last show for Burberry, his 66th in 17 years, was TIME. It was staged in a massive abandoned warehouse in West London, a different kind of venue for the designer but one that loaned itself to “Our Time," a huge installation by London-based United Visual Artists, “investigating the subjective experience of the passage of time”, according to the note on my chair. The "investigation" took the shape of dozens of light fixtures moving in rigid choreography above our heads. I guess we do measure time and distance by the movement of light.

But in fashion, we also mete out time in collections. Bailey celebrated his years at Burberry with a look back, not just at his own work but at the house’s archives. He revived old prints, like vintage silk scarves, that were used for licences decades ago. He put his first trench coat on the catwalk, and boys in punk kilts. There were slip dresses, and bias-cut evening dresses, and embroidery-clotted flapper frocks, and explosions of tulle restrained by long knits that cupped the butt. There was also a check tracksuit, a reminder of the Time of the Chav, just before Bailey arrived to begin the transformation of Burberry into a global fashion powerhouse. This one was in silk, and it had been infected by a scarf print. Still, trackies will be trackies.

Given the momentous occasion, Bailey was surprisingly dry-eyed, even when his mum and dad made their way through the crowd to congratulate him. “Serene," he preferred to call it. “I’m not sure why.” Maybe because he was free. “It’s liberating to not have to do another one next season,” he agreed. In that spirit, he’d made an LGBTQ+ rainbow of a lot of the collection, from Adwoa Aboah opening the show in a huge shearling over a white cotton floorsweeper streaked with colour, to Cara Delevingne closing it wrapped in a rainbow cloak. Edie Campbell sported a rainbow puffa, there were chunky trainers in rainbow stripes, and logo sweats with BURBERRY picked out in colour. But that also reminded me of Bailey’s whimsical early years at the house, before it became a sophisticated global beast, when he indulged the quirks of his idols like Davids Hockney and Hicks. There’d been plenty of primary colour in Burberry back in those days.

So there were personal touches in amidst the grandeur of Bailey’s last act. The soundtrack was Jimmy Somerville, whose music and lyrics had always meant a lot to Bailey as a young gay man. For the finale, the models walked through an allée of rainbow lasers while Jimmy wailed “Don’t Leave Me This Way." But it seemed to me that Bailey was leaving in exactly the way he wanted to.