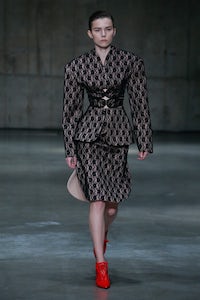 LONDON, United Kingdom — You can’t say this often enough: Christopher Kane is such a profoundly peculiar designer that he should be declared a national treasure and given protected status. There is no other designer in the UK who can unsettle and provoke the way he does. That probably means his career is not plain sailing. For sure, it’s a hit and miss proposition. That’s the risk you run when your ideas can’t be corralled into tidy, familiar little boxes.

And so it was with the collection Kane showed on Monday, the first since the announcement of his conscious uncoupling from Kering. It’s going to be a long process, but Kane claimed he was cool with the whole thing. Besides, It’s not like he hasn’t always been anything but independent.

Consider the theme of his latest: Sex in Nature. The soundtrack interwove voiceovers from David Attenborough and Marilyn Monroe as though they were having a conversation. Hallucinatory phrases drifted out of the electronic murk. At one point, Attenborough referred to “the sinister side of beauty”.

A t-shirt printed with Kane’s drawing of two praying mantises obligingly walked past with the message “Sexual Cannibalism”. The female praying mantis is literally a maneater. The idea was also portrayed figuratively in a broad-shouldered, small-waisted silhouette that reminded Kane of Joan Crawford, a notoriously predatory superstar.

Between them, Monroe and Crawford brought an odd flavour of old Hollywood, Sex in a different kind of Nature. A slouchy mohair sweater over a flaring tulle skirt had a pin-uppy glamour. So did a white lace off-the-shoulder sheath. Sex is a preoccupation in Kane’s work, but he usually approaches it in an unpredictable, unfashion-y way, like biology or botany. Here, I wondered if it might have been entomology, under the questing influence of David Attenborough.

So you can add horror to Kane’s list of preoccupations. Maybe a little sci-fi as well, though that connection didn't click so well with this collection's lace looks, which were gridded with strips of crystal. Kane said he loved the harsh lines contrasted with the lace. To him, there was something futuristic about the result. He sees things we don't.