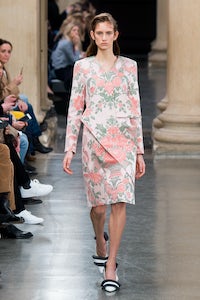 LONDON, United Kingdom — He's back. Christopher Kane, fashion's mad scientist, rediscovered his mojo with his collection for Autumn/Winter 2017. After a detour into highly personal territory while he processed family tragedy, Kane returned to the lab, the creative hub where his best work once took shape. And if the result scarcely hung together in any coherent way, it was, just like before, a geyser of thrilling, perverse ideas.

Kane is a protean talent who matches technical ingenuity to an imagination which is unhindered by anything as banal as good taste. He insists on his working class status, and that surely contributes to his outsider’s point of view. There is no reverence for custom. Which is how he was able to cover cashmere with foil to make a greasy-looking cardigan, or how he could fold damask as if it was an envelope or a courier box, pieces slotting together like something mechanical.

But the lack of reverence didn’t mean lack of respect in this new collection. The factory floor — and the people who staffed it — joined the lab as inspirations for Kane. He was fascinated by the industrial processes that make the world’s most opulent materials in little factories around the world. Hence the damask, or the tonic fabrics used here, actually a taffeta “steeped”, according to the show-notes, “in the history of silk-making.”

But the opulence was undercut by the effects. The greasy cashmere for one. The coated lace, for another. More lace, this time pure and white, hung in delicate scarf points, but it was topped by a slouchy Pepto-Bismol pink cardigan. Holographic flowers (plucked in Hell by the looks of them) besmirched an otherwise magical tabard of pailettes mounted on chiffon. Flowing silks were printed with the naïve sci-fi spaciness of outsider artist Ionel Talzapan.

Kane’s willfulness was at its most creative with his footwear. Last season’s Crocs were now fur-trimmed. High-heeled pumps were strapped in yellow or blue kitchen sponge. Protectively padded perhaps, but they looked like Marcel Duchamp readymades.

One of Kane’s most admirable qualities as a designer is that he never courted favour, or displayed a particular need to be liked. So his collections continue to be difficult, but intensely rewarding. This one was no exception. Its toughness was matched by the icy electronic anomie of Simon Halsberghe’s soundtrack. Literal cool.