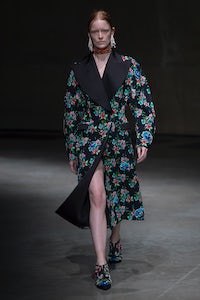 LONDON, United Kingdom — Christopher Kane is newly content with his boyfriend and his dog, happy to stay in with them, tidying up. “I like cleaning,” he says. “I love doing the ironing while I watch TV.” But this domestic god has a dark side. “I’ve always been a pervert,” Kane announced after his show on Monday. “Not a fetishist, though I love the idea of it.” Is he absolutely sure about that? His collection was nothing if not an entirely fetishistic wallow in the quiet joys of domesticity, seamed with a knowing nod to what really goes on behind the twitching net curtains of suburbia. The presiding spirit of the show was Cynthia Payne, a notorious madam who ran her brothel out of 32 Ambleside Avenue in the leafy London suburb of Streatham and earned herself the sobriquet “Madame Cyn” for her services to London’s great and good in the 70s and 80s. The ghosts of Cyn and her girls insinuated themselves into Kane’s languid lingerie looks. And a similar coy sex-for-sale mood was evoked by the designer’s use of paintings by American photo-realist John Kacere, whose singular obsession was the female groin in panties.

No one ever said Christopher Kane wanted to make things easy for himself. Sexuality has never been far from the surface in his designs. (Re-imagine, if you will, his anatomical collection from Spring 2014.) And, more than ever, he wants to push, to provoke. That’s what the designers he grew up loving – Gianni Versace, Helmut Lang, Christian Lacroix – never stopped doing. Kane’s talent is such that he deserves to stand with them. But while this new collection highlighted that strength, it also threw a spotlight on his greatest challenge. Like Versace, Lang, Lacroix, his work is a tightly woven web of personal codes, embedded deep in his upbringing: family, school, taboos, tabloid newspapers, horror movies and, here, pound shops (their US equivalent is the dollar store). The worry is that those codes are becoming so personal, so idiosyncratic that they're closing the world out. So, when Kane says something offhand about his collection like, “I wanted it to look poor,” you feel like coming over all messianic and reassuring people that it’s not a real garbage bag, it’s not a real J Cloth, it’s not a real mop-head. What it is, is the incredible alchemy of a genuine design genius who turns banality into haunting beauty, or fearlessly courts ugliness in the name of fashion.

At which point, we simply have to sit back and appreciate the cheekiness of a tiny, precise handbag in its own dustcover, or washing-up gloves given a glittery sheen, or a shower curtain turned into a skirt, or a t-shirt suspended from clothes-pegs with a graphic of a washing machine, a “real” J Cloth suspended from its gaping drum. And the stock-tie blouse in duchesse satin, just the sort of thing a suburban madam would don to look “saffisticated”. Or the prairie dress which might have been stitched from a Hefty CinchSak. And the shoes! A mop-head turning feet into mini-Cousin It, joining last season’s sponges. Scouring pad knits, wipe-clean housecoats and, in a final glorious apotheosis, the twitching net curtains turned into a coat and dress.

“You want clothes to be clothes again,” Kane said passionately, and by that, he meant the incredible frisson of fashion which he thinks is fading away. Still, I fret for him and his frustration, because, on some level, his own clothes are becoming more performance art than fashion.