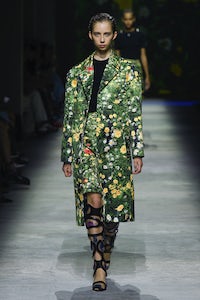 LONDON, United Kingdom — Ecosexuality is Christopher Kane’s new proclivity. Always a fan of the fetish, he zeroed in on people who love the earth in his latest collection. As in, literally love it. Here we pause to allow your imagination to run riot.

Kane’s own love of nature and science has inspired his best collections. So it made sense that, at this watershed moment in his career where, post-Kering, his future rests in his hands, and his alone, he would take a moment to refer back to past glories as a way to remind a new audience of his spectacular accomplishments. A post-show Kane was quick to knock any hint of environmental bandwagon-jumping on the head. This was always the way he had perceived the natural order. And he embraced the unnatural order with equal vigour. Hence, his revisit of the fluoro lace from Spring/Summer 2011 and those peculiar gel-filled plastics that first appeared in Autumn/Winter 2011 (that was clearly a good year for Kane). Here, it was sculpted into everything from bustiers to camisole straps to the detailing on jackets and footwear.

To look back on those collections is to see a young designer in the full flush of a fiercely — even disturbingly — original vision. Kane was smart to remind us of that guy. It is, after all, possible to be too far ahead of the curve for your own good. When he was asked if he’d been exploring his own history with his latest collection, he laughed dismissively and said, “Sounds good to me.” But his soundtrack on Monday was provided by singer and Native American activist Buffy Sainte Marie, one of the first musicians to use synthesisers (in the late Sixties) and digital technology, and it was surely telling that Kane was making a connection with such a visionary outsider. Sainte-Marie sounded fabulous against the shifting projection of little fluffy clouds and wildflower meadows that played against the cavernous concrete walls of Kane’s industrial showspace.

Those same flowers covered coats, jackets, skirts, counterpointed with sci-fi footwear. The contrast prevailed throughout the collection: a suggestion of softness curdled by a hard edge. It’s a formula that has shaped Kane’s own brand of highly sexualised glamour, and here it was on spectacular display, frilly and garish co-existing in fine fetishistic form. Experience has added refinement to Kane’s repertoire. Consider his use of PVC. A gorgeous little orange slipdress with a transparent bodice and a PVC flip at the hem felt like a glimpse of future fashion. But, typically, it wasn’t an entirely optimistic glimpse. Kane is too perverse for such simplicity. Or maybe it’s just the shadowy compulsions of human sexuality that infuse his clothes. Whatever, it’s been a while since we've felt such twisted oomph from him, and it was unholy-good to have it back.