The Way Back Home at Christopher Raeburn 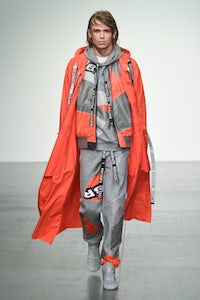 The Way Back Home at Christopher Raeburn

LONDON, United Kingdom — The adventurer will always be the perennial muse for Christopher Raeburn’s spliced eco-menswear. This time round, he looked to Slawomir Rawicz, a Polish lieutenant who was allegedly imprisoned and subsequently escaped from a Siberian Gulag camp and began a long journey south on foot, before eventually finding himself walking through the heat of the Gobi desert, the chill of the Himalayas and colourful landscapes of India.

What transpired was a collection centred on a bright orange-red and camouflage khakis, layered together with a sporty sensibility. There was plenty of the outerwear that Raeburn is known for, and his customers surely love, and most of the looks had all the emblems of the athletic 90s sportswear look: branded waistbands, bucket hats and drawstring hoods. However, Raeburn’s lettering wasn’t his name, but his mantra: “Reduce, Recycle, Remade.”

As much as the message is one of the most admirable elements of Raeburn’s design ethos, it begs the question of why it was used in the first place. Combined with the neon tulle T-shirts and papery nylon-like fabrics, some of those latter eco-branded looks felt like an overwrought interpretation of the well-trodden athletic streetwear trend that has been a major point of reference for so many of this week’s designers. That kind of homogenisation is a shame — as that reference was once the punchy alternative to a week of tailoring firms, and had a much more visceral sense of subversion. Raeburn may love an adventure, but sometimes there’s no place quite like home.