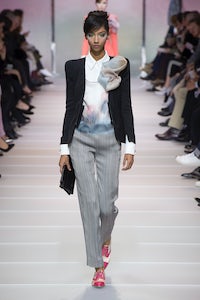 PARIS, France — Clouds are ethereal, ice cream castles in the air. Clouds are thunderous. They rain and snow on everyone. Giorgio Armani looked at clouds both ways with his new couture collection. He named it Nuages to give his inspiration a more poetic flavor.

Maria Grazia Chiuri mentioned the other day that the Italian tradition of Alta Moda is more inclined to the sartorial than the fantasy of Parisian haute couture. That is definitely the case with Armani. He opened his show with the soft tailoring that is his signature, paired with white blouses, trousers and correspondent shoes. The look was practical, the concession to couture a furled lapel with a watercolour print. As the collection evolved, Armani maintained the sartorial structure with tailored shorts. The painterly effects continued as well, blurry clouds of colour shading into abstract florals, scatterings of paillettes suggesting raindrops, or the shimmer of sunlight through mist. The same effect was achieved with asymmetric swathes of organza veiling sequined tops. Then there were the darker sky-at-night tones, shot through with flashes of colour.

You could extend the cloud analogy to the pouf skirts, and to the swirling swags of fabric that closed the show, but that wasn’t actually what stood out most. More to the point was the designer’s targeting of the younger clientele he insists is turning to Armani. Come rain and shine, he endeavoured to give them party outfits galore. But it was only when his ineffable restraint evaporated in an explosion of crystal-trimmed feathers that the party really started.