Coach Making a Play For the Major Leagues

As the mid-market leather goods house celebrates its 75th anniversary with a large-scale show, the buzz around the company's acquisition strategy continues to swell. 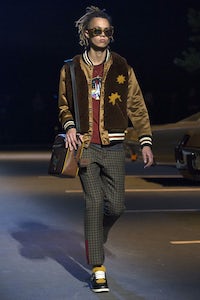 Coach Making a Play For the Major Leagues

As the mid-market leather goods house celebrates its 75th anniversary with a large-scale show, the buzz around the company's acquisition strategy continues to swell.

NEW YORK, United States — Every show Stuart Vevers has staged since joining Coach has been a meditation on the American teenage experience, or least the cliques associated with it: rockabilly, punk, varsity, skate, goth, street. Like your classic high school “floater,” Vevers casually moves from group to group, stringing his obsessions together with novelty trinkets, intarsia knits and shearling-lined coats, bags and shoes.

Over time, this stylised Americana has become Coach’s new visual identity, a look that has helped reposition the brand as something that chief executive Victor Luis likes to call “approachable luxury.” The company’s return to growth, which has outpaced mid-market competitors, can be attributed, at least in part, to Vevers’ consistency from runway to retail. If the Coach’s mascot was once the Bonnie Cashin-designed saddle bag, it is now Rexy, the animated tyrannosaurus which began as a random tchotchke and is now so ingrained in the label’s iconography that it spawned its own capsule collection.

That 23-piece collection — which includes everything from a $25 leather postcard to $2,000 varsity jacket — was made available after last night’s integrated Women’s Pre-Fall 2017 and Men’s Fall 2017 runway show, which took place at the massive Pier 94 on the edge of New York’s Midtown. It was one last chance for the brand to celebrate its 75th anniversary, and presumably to squeeze a bit more juice from social media as we enter the last two weeks of holiday shopping. It was also a nervy move to host a large-scale event just a few weeks before the holidays, and off the traditional men’s calendar.

To be sure, it was the type of thing that only a few companies have the budget to pull off, especially at the end of the year. But Coach Inc.’s ambitions are large in scale and, as indicated by its acquisition of Stuart Weitzman and reports of its attempted takeover of Burberry, go far beyond the Coach brand. Some have gone so far as to suggest that Coach is aiming to build a conglomerate in the vein of LVMH and Kering.

“No one internally will ever say we’re trying to be an American LVMH, I can promise you that,” Luis told BoF on Thursday. But the executive did acknowledge that Coach is looking at future acquisitions, without mentioning Burberry in particular. “We believe that Coach Inc. can be bigger than the Coach brand,” he said. “The priority, we’ve said clearly, is terrific brands where we can leverage the Coach know-how, which is especially strong in our ability to develop brands both internationally and domestically. We’ve done quite well in growing the Coach business across the world, especially Asia.”

Luis also believes its accessories-focused formula of premium product at an accessible price point also sets the company up for long-term success. “Handbags are the most important category in the fashion goods space,” he said. “Over the medium- to long-term it is still the best space to be in because there has been, for quite some time now, a shift from apparel into accessories. We believe the dominance and continued growth of fast fashion will continue to free up dollars in people’s wardrobes towards accessories.”

But in order to sell those accessories, Luis needs Vevers to sell the dream first. Thursday’s set was the physical embodiment of the designer’s vision for Coach: a motel and its parking lot dotted with jalopies and a garden of fluorescent signs serving as a backdrop. The clothes themselves were a continuation of the pastiche Vevers has been reworking — or simply working — since 2014.

Handbags continue to drive the Coach business, but it’s outerwear and shoes that are driving the aesthetic. “Shearling feels like a Coach material now,” Vevers said backstage before the show. “I always feel like the pieces should feel un-precious.” Shearling-lined clogs with glitter-covered heels, leather-sleeve baseball jackets and flair-covered bombers were the dreams of a Nineties kid scouring vintage shops for Seventies wares.

Playing into Stranger Things-era nostalgia, Vevers stuck the NASA logo — which has been popping up on fashion items for the past year or so — on t-shirts, sweatshirts and jackets. It’s almost pointless to talk gender or season here, because the collection’s looks, even if they were gender-specific, were entirely interchangeable.

To be sure, the emphasis on outerwear and shoes is not only a creative choice, but a business choice. Luis says that three categories — handbags, shoes and outerwear — taken together generate about $80 billion a year globally. “Our core business has been and continues to be and will continue to be — within the Coach brand — handbags and accessories,” Luis said. “We have been pretty focused on two additional fashion categories that we believe are drivers of the top line and bottom line for the business that can be truly financially important.”

For the finale, a children’s choir all dressed in blue velvet sang “Empire State of Mind,” artificial snow drifting down from the sky. Afterwards, guests were led by Luis and his predecessor Lew Frankfort walking arm-in-arm into a party area.

“I don’t know if Coach, the company, will still be called Coach, but in 25 years we imagine Coach Inc. certainly being bigger than just the Coach brand and the Stuart Weitzman brand,” said Luis when asked where he sees business at 100. “But it will be a very important player in the premium space with great brands in several fashion categories.”

However, to achieve that, it’s clear that Luis wants to make sure the world can see what Coach is capable of through its namesake label. Tonight, once again, Vevers was given carte blanche to drive his message home.