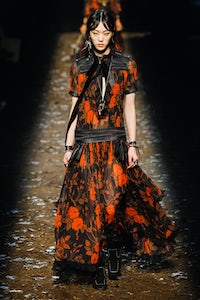 NEW YORK, United States — At the close of the Coach show, the models walked through the haunted forest created by set designer Stefan Beckman and vanished into thin air. Or at least, that was the effect Stuart Vevers wanted. Something spectral. This collection was the fourth anniversary of his tenure at Coach, and he couldn’t really have done much more to advertise what a success he’s made of it. Once, true-blue Manhattanite Marc Jacobs was the incontrovertible showman of New York Fashion Week. Now it’s two outsiders, Raf Simons and Vevers, who fill those shoes – and it’s the latter who has Jacobs’s erstwhile dream weaver Beckman on his team.

The collection celebrated the pillars of Coach – the outerwear, the shearling, the biker, the varsity jacket – but Vevers was also keen to stress the dressed-up element he’s been able to introduce in the last year. If Coach has been America’s house of leather for 76 years, here is its evolution into an American luxury brand.

Vevers showed light, sheer prairie dresses, their innocence subverted by rich, shadowy colours. They streamed with ribbons and shimmered with a scattering of sequins. “Darkly romantic”, he called them. But in thinking about American luxury, he’d also come to the conclusion that it shouldn’t be perfect. So there was an artisanal, almost homespun feel in pieces that seemed like a couple of dresses stitched together, or layering that felt improvised in the moment. It’s one of Vever’s skills to infuse clothing that is quite decorative and ornate with such a casual spirit, a knack he shares with Alessandro Michele at Gucci.

And, like Michele, he loves a doodad. Both mens- and womenswear, and all the gorgeous bags, were laden with leather and metal work, dripping with tassels and fringes, and strange, alluring little talismans. Vevers compared his model army to “a gang, wearing all these mystical symbols that connect them”. It takes very little effort to see how that train of thought would connect with the new market that he is so artfully courting for Coach. Which raises another intriguing point about his outsider commonality with Simons: both share a view of America that is tinged with the Gothic, an enduringly attractive inclination for people of a certain age. For the rest of us, it may seem, on one hand, like a logical response to current events. On the other, there's no doubt that it makes for some of the most compelling storytelling in fashion.