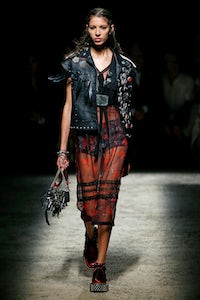 NEW YORK, United States — Stuart Vevers has spent the last three years reinventing “aspirational luxury” brand Coach for a new generation. And if the financial results are any indication, his approach seems to be working. In the last quarter, net sales were more than $1 billion, up 11 percent from last year. Even in the US, where tourism is lagging and locals are skittish about the election, there was a 9 percent jump.

Vevers’ success has a lot to do with his talent as an image-maker. “Consistency is actually really important,” he said backstage after his Spring 2017 show. “This was a big change for Coach, a big reset. You’ve got to give people time to get to know it and to establish it. The fact that the client is enjoying it gives me a lot of confidence to push it forward.”

From his Autumn/Winter 2014 collection on, the South Yorkshire-bred Vevers has chosen to really drive home that idea of Americana as seen by a non-American. He loves girl gangs, rockabilly and the emergence of the “teenager” in the 1950s. This season, he sent his tough-girl models down the runway wearing souvenir “merch” tees printed with images of Elvis, moto jackets patchworked with prairieland calico, and floral baby doll dresses trimmed in bits of black lace and tied up with black ribbons.

He put leather fringe on everything and there were enough studs on several items to rival a custom piece from the now-shuttered, long-beloved downtown Manhattan store Bess. It was fitting that Courtney Love — a muse to Hedi Slimane, whose playbook Vever has certainly been reading — sat in the front row this season.

Another 1990s icon, Winona Ryder, was there, too, next to her Stranger Things co-star Millie Bobby Brown, whose Gen Z status makes her an ideal Coach brand ambassador. Millennial friends of the house Emma Roberts and Chloe Grace Moretz were on hand as well. It was an artfully strategic mix.

But back to the clothes: Vevers’ enthusiasm for piling it all on can feel overzealous and at times reductive. And yet, it speaks to his marketing savvy. He knows what he is selling, and it’s not a petticoat skirt trimmed in ric rac or a floral nightgown dress. Instead, it’s the outerwear — embroidered varsity jackets, patchworked shearling coats and many, many leather motos — that will move.

As will the bottom-line boosting bags — like the popular Dinky crossbody — which Vevers likes to crowd with a variety of baubles. The endless options makes them collectible, and at well under $1,000, affordable for more than a few. Vevers says he’s just having a good time, but what he has created is a case study in youth marketing. It will be interesting to see how far he can take it.