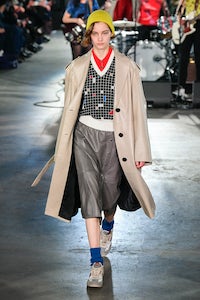 NEW YORK, United States — If you’d been a certain kind of artistic pop-obsessed sort growing up in the North of England in the 80s and dreaming about how life could be in a real city like New York, chances are the realness would have been nightclubs like the Mudd, artists like Haring and Basquiat, music like new wave cool shading into no wave noise. I picture Stuart Vevers as that sort. His gig at Coach has been an extended exercise in wish fulfilment. And so it was with his latest collection. The Coathangers banged their way through Blondie classics (Drummer Stephanie Luke aka Rusty Coathanger had a fabulous voice like sand and glue) while dozens of boys and girls marched by like stage school players in Lower East Side: The Musical. Basquiat’s personal style was the benchmark. Oversized coats. A worn, vintage feel, delivering the desired scruffiness. Leon Dame carried an artist’s portfolio. Camp. He was head-to-toe in New Wave stripes (Vevers actually lifted the pattern from a lining Bonnie Cashin designed for Coach bags in the 60s). Basquiat’s signature scribbles decorated coats, knits, sweats and tiny structured purses. His old collaborateur Andy Warhol made a guest appearance as a peeled banana on the very last bag.

Basquiat’s sisters Jeanine and Lisane were in the front row, and his niece Jessica was on the catwalk. But it was actually Anok Yai who wore the look best. Her imperturbable cool, her edge of insolence gave life to Jean-Michel’s thrift-shop chic, the tweedy topcoat, the vintage boiler suit. And she was an instinctively sensual counter to the collection’s sanitised flavour.

When Vevers came to Coach six years ago, it was like he was remaking American road movies in his mind. Coach had no clothing heritage so he had a blank slate and he created some memorably spectacular scenarios. Times have toughened. Now the venue was a barebones ex-post office depot on the edge of Manhattan. It was almost as though Vevers was irising down from the great outdoors to a couple of blocks of urban grit. There’s a real story there. Maybe it’s even the American story – kid with a dream leaves the back of beyond to make it in the big smoke. But it wasn’t gelling on the catwalk, and maybe it never would. But Anok? Yeah, she sold it. And so did Debbie Harry, ordained Friend-of-Jean-Michel, who stormed on stage for a surprise finale, rampaging through "Dreaming" in remarkably fine voice while the Coathangers walloped away behind her.