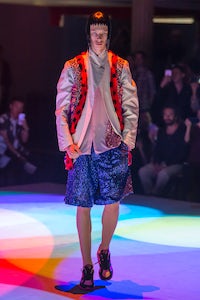 PARIS, France — Elevated catwalks are anathema to Rei Kawakubo, but the raised square that filled the centre of the Salle Wagram for Comme Des Garcons’ show on Friday afternoon looked a lot like a dancefloor in a nightclub. And sure enough, when Frederic Sanchez’s soundtrack blared and the coloured spots started to spin and a passel of boys shuffled onto the floor, Comme54 sprang into awkward life.

Kawakubo gave Sanchez a one-word brief: DISCO! He mutated it a little: as much disco as a skewed spin on rave. The clothes followed suit: Madchester made even madder, like the models’ Liam Gallagher hairdos, exaggerated and drowned in sparkly gloop. Glitter cascaded over Comme signatures like the baggy shorts and the elongated, voluminous jackets.

Kawakubo’s message was this: What’s on the inside matters. All the jackets were turned inside out. So the incredible patchwork of sparkle, fake fur and animal print that we saw was actually a lining? You could scarcely picture a more vivid analogy for the crazy turmoil of anyone’s inner life at this particular moment in the decline and fall of western civilization. But it was so upbeat, sweet even. There were shirts and waistcoats that looked like they’d been composed of candy. And the stumbling self-consciousness of the models (who really wants to dance in front of an audience?) was a charming antidote to the otherwise-frostiness of this season’s runways.

The takeaway was a fierce optimism. It’s not always been an attitude that easily attaches itself to Comme des Garcons (collaborator Mona Luison’s doll-parts jackets harked back to Kawakubo’s ability to effortlessly disconcert) , but in the wake of a major exhibition at New York’s Metropolitan Museum, the designer’s unique position in fashion has been brought to the fascinated attention of a much wider audience. You have to imagine that feels good. Well, something made her want to throw a party.