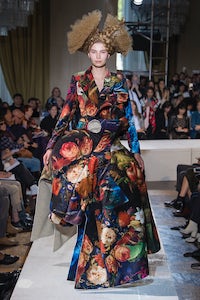 PARIS, France — Before the Comme des Garçons exhibition opened at the Metropolitan Museum in New York in May, Rei Kawakubo seemed convinced that no one would show up. Hundreds of thousands of visitors begged to differ. For her first women’s presentation since the epochal Met event, Kawakubo chose to show in the austere grandeur of the Russian Embassy. She kept the raised catwalk from last time, so everyone got a good look. And she offered a collection which could hardly disappoint any of the vast audience who got acquainted with her work through the exhibition in New York. It was essential Comme in its defiance of fashion orthodoxy. The proportions challenged conventional notions of utility. Sleeves fell to the floor, hips were wider than any door. One bouclé coat-based ensemble was a full five feet wide. Time and space elided in the 16 looks, dressed with hair by Julien D’Ys that married Africa and the Middle Ages, collaged with work by eleven artists, from Renaissance master of illusion Arcimboldo and Zen monk Sesson Shukei, also from the 16th century, to contemporary outsider artist Anne Grgich and cyber star E-Boy. Frederic Sanchez’s soundtrack matched them with eleven snippets of music, all of them by young women.

It was tempting to attach some significance to this last point, because the collection did seem to be “about” girlhood, insofar as anything Kawakubo does lends itself to such direct interpretation. There were cartoons, and flowers, and maybe a little girl’s dream of a frilly princess something or other. Or might it even be a wedding dress? D’Ys compared some of his hairstyles to nests. They were filled with the detritus of Japanese kawaii culture, the cuteness that bequeathed us Hello Kitty. She was there, in the nest, along with dozens of girlish trinkets and plastic doodads. One of the eleven artists was Macoto Takahashi, who became famous in the 60s for his proto-manga paintings of dewy young girls with huge starry eyes. You could imagine them hoarding the stuff that decorated Kawakubo’s clothes.

There was something immensely sad in that. Just as girlhood is an inevitable prelude to lost innocence, Kawakubo’s collection seemed to recognise another human inevitability, the most inescapable of all. The clothes were monumental, but the monument was to irrevocable loss. Over all the kawaii, there hovered a big black raven. One of the most striking pieces looked to be composed of a huge, crushed mass of prettiness, petticoats and lingerie, draped over a bodysuit of the same. The model posed coquettishly on the catwalk, a cliché you’d never expect to see at CDG. But the act was so deliberate it felt like a direction. “Be pretty now.” Because it won’t – it can’t - last.