There was optimism in this collection. 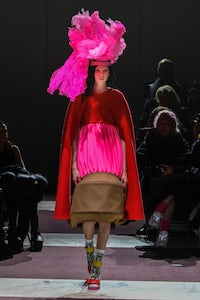 There was optimism in this collection.

PARIS, France — One of my many unrealised end-of-decade projects was a meditation on Rei Kawakubo’s extraordinary prescience as a designer, from the retail disruption of Dover Street Market and the extra-curricular aesthetic endeavours (opera!) to the ways that her collections anticipated the convergence of the physical and digital worlds. Her never-ending quest has been a pursuit of the new, though a few years ago, she seemed to acknowledge it was doomed. “We live in such an information-saturated world, it’s hard to give people something they haven’t seen.”

Then, on Saturday, Kawakubo doubled down on that sentiment when she supplied this quote to clarify her latest show: “Is it not impossible to make something completely and utterly new, since we are all living in this world? So continuing my work as a perpetual futurist, I worked from within the CDG world.” Which I read to mean that, in order to satisfy her appetite for things to come, Kawakubo would be compelled to follow the paths she had already defined for herself within her own company.

From anyone else, that would sound like the solipsism of one hand clapping, but, like her peer Vivienne Westwood in her heyday, Kawakubo has always thrown out any number of ideas, some of them fully investigated, others lying fallow, to be explored later. Her new collection offered just such an opportunity.

She called it NEO FUTURE. “Neo” means not just “new” but also “revived,” and there were indeed multiple echoes of past triumphs. Instantly recognisable from Kawakubo’s Lumps and Bumps collection in 1997 were the pillowy forms that completely transmogrified the silhouette. The Flat collection from 2012 (“The future’s in two dimensions,” said Rei at the time) made its presence felt. So did 2012’s magnificent White Drama, with its ceremonial sleeves, and that Noughties stretch of “body as object” collections. Dark shadows gathered again in a couple of ensembles, as they had a year ago for A/W 2019. But it was more than “spot the quote,” because the original ideas were recontextualised: a fabric, a texture, a technique recalibrated the eye.

Each look was accompanied by its own piece of music – 20 mini-soundtracks ranging from classical to French chanson to minimal techno. That was one very clear way to underscore that here were 20 mini-universes. Kawakubo has always resisted what she surely sees as the banality of storytelling or an overarching narrative to infuse “meaning” into what she does. But, honestly, how can you help yourself when you’re confronted in the space of mere minutes by something as visually complex as a Comme des Garçons show?

Since we last encountered her, Kawakubo has had a run-in with cancel culture over the wigs in her men’s show in January (one man’s pharaonic headdresses were another man’s carelessly appropriated Eritrean dreads). There, at least, she encountered the kind of unanticipated controversy that would have been something new for her “within the CDG world,” and it was all down to people seeing something that she herself hadn’t seen. Life is, in the end, still full of surprises.

Which is why I was so pleasantly surprised by what I saw as the optimism of this new collection from Kawakubo. Some of the models had piles of tattered, brightly coloured fabric on their heads, like huge, glorious plumes. Others were shrouded in veils of black or white lace. More secret ceremonies, like a first communion, or an inspiring séance with the spirits of the past. Well, that’s what I was telling myself anyway. Rei would undoubtedly blanch at the thought.