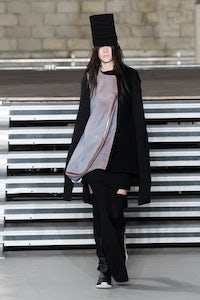 PARIS, France — “If you don’t know who I am, it’s bonkers.” Number One Reason to love Rick Owens: devastating clarity about self. Watching his parade of caped, patched, trussed models on Thursday night, you couldn’t help but wonder how liberally your sense of surrender would be shared by your non-fashion family. But that’s art. Some people get it, most people don’t. Their loss.

Owens’ latest presentation was a response to chaos. It sounded like he has faith in ceremony as a way for people to bond over shared values. “When there are chaotic forces, you need community,” he said, “It’s a lack of community that has created this divisive situation. Maybe there’s not enough ceremony. But fashion shows are contemporary ceremonies, where people bond over beauty.”

Number Two Reason to love Rick Owens: he doesn’t really believe that. His own feelings about beauty are conflicted. Society has standards. They piss Owens off. He’s continually proposed a challenging, pagan something else — exactly why an unconventional woman like Gwendoline Christie, in the front row on Thursday, would be so ready to extol his virtues. The ceremony he staged for his latest collection embraced Stonehenge at one extreme and Catholic mass at the other. A Druid high priest here, a Catholic high priest there…in womenswear. The models wore headdresses that could be interpreted either way.

The collection was named "Glitter," like the men’s collection in January. But where that one was a very oblique translation of the excessive spirit of glam rock in the early 1970s, Owens claimed this one was about “the glitter of civilization." You could imagine the clothes as the shiny leftovers of a damned world, the remains of army uniforms, the khaki wool, the leather, the lumps of quilting. Owens often skates around a kind of nu-medievalism . There were tabards aplenty in this collection. At the same time, it was longer, leaner and more youthful than anything else he’s showed.

“All of us can pursue a civilised life, you can improvise ceremony,” he insisted. Then he showed how, with veils and regal headgear whipped up from sweatshirt sleeves. If you were on a gloom-and-doom tip, they looked like the stuff people wear when there’s a toxic spill.

On a more positive note, the models might have been beekeeper’s wives. What better way to invoke the glory of a healthily functioning community than a beehive. Owens said he was looking for the poignant, sweet spot of community before it goes sour, before it becomes an army and engages in conflict with another community. We love bees! But the life cycle of the hive becomes a kind of metaphor for Owens’ work. “The more I go along, the more I see there are no ends,” he said. That’s one never-ending story that can only deliver dividends for its audience.