PARIS, France — What season is this exactly? And what's on show? Is it couture, demi-couture, resort? Questions like these kept recurring at the haute couture week which closed in Paris on Wednesday night: a four-day, full-speed fashion extravaganza complete with ready-to-wear shows, fine jewellery presentations, dinners and parties. The event started with a wintry chill and ended with another unbearable heatwave, a meteorological metaphor, perhaps, for the state of confusion currently ruling the fashion system.

It was all very discombobulating, raising questions on the very purpose of haute couture week in this day and age. Is it about old-school madames or glitzy celebrities walking endless red carpets and the nouveaux riches of the emerging markets with growing spending power and the will to show off? Is it an outburst of unabashed glamour? A laboratory for madcap experimentation? An emerging platform for ready-to-wear brands? Truth be told, it was all of the above and the result was puzzling but also exciting.

Miu Miu was the first ready-to-wear brand to infiltrate the couture schedule with its pre-collections. Vetements followed last year, having spotted in couture a highly advantageous time slot on the fashion calendar which allows the label to get ahead of the selling season. Now everybody wants a piece of that cake. 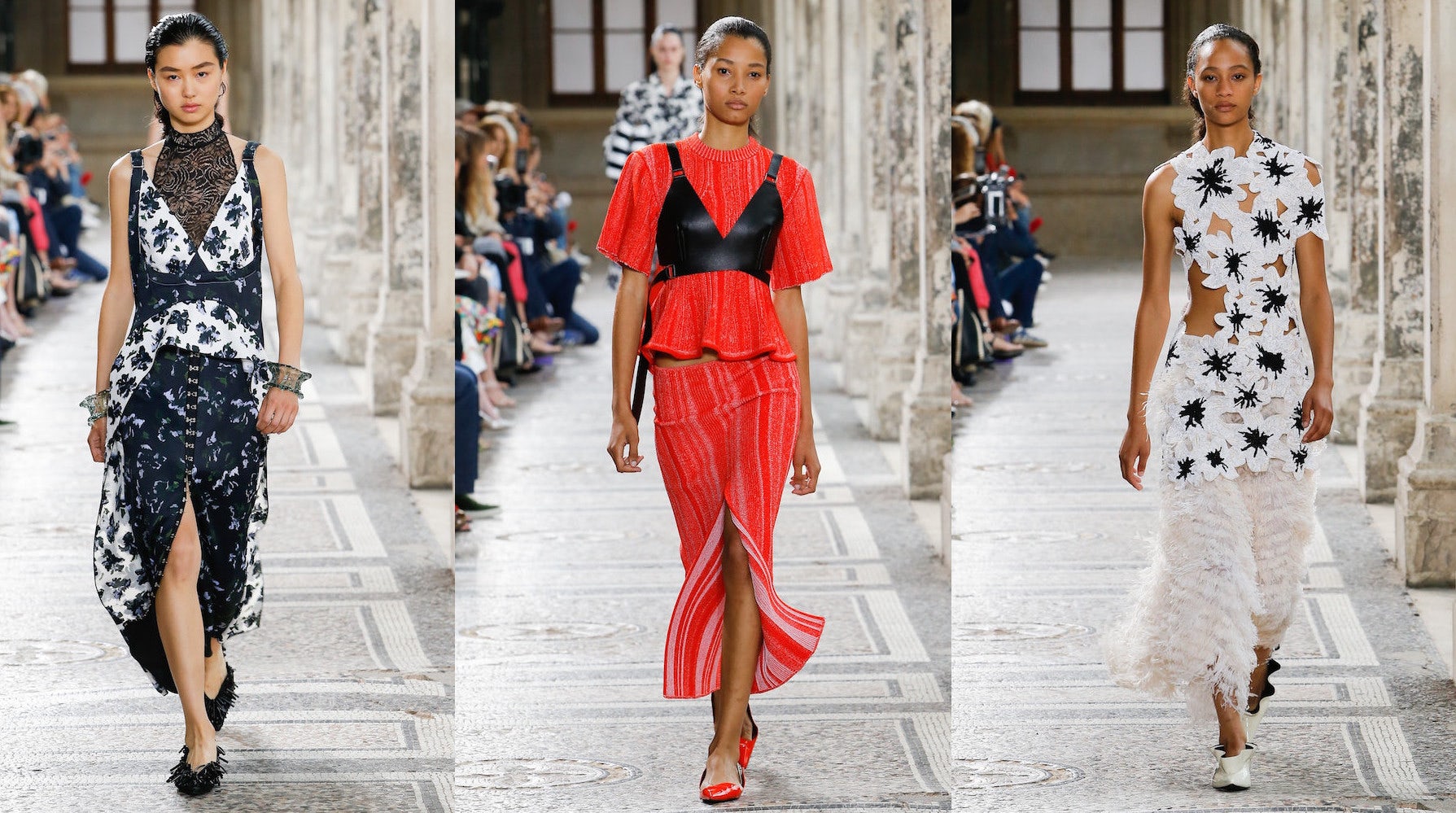 The Chambre Syndicale — which does an incredible job in keeping up with the times and has positioned Paris as the global capital of an increasingly fragmented fashion system — acknowledged the shift, allowing a day in the calendar for ready-to-wear lines. The edgy Americans — Rodarte and Proenza Schouler — arrived this season, along with Dundas, and the effect was both invigorating and slightly discomforting. On the one hand, Paris’ newfound openness is wonderful: inclusion and acceptance can only help to drive progress. Yet flanking couture with industrially-made garments underscored a lack of true innovation amongst the new ready-to-wear arrivals. Paris is Paris, after all. The competition is fierce and the judgements are unforgiving.

At Proenza Schouler, a multiplication of ruffles and smatterings of feathers on long, sculpted forms looked like a cool kid's take on couture. It was fine, though clearly owed a debt to both Phoebe Philo and Rei Kawakubo. But what really stuck was the coldness of the Proenza woman in sharp contrast to the flood of emotions you usually get at Paris couture. The Mulleavy sisters did better at Rodarte: the succession of floaty dresses and pearls-pierced motorcycle gear they showed in a Left Bank courtyard felt poignantly dreamy, yet the clothes had, at times, a slightly homemade quality. The motocross pants, in particular, were devilishly ill fitting, which was a faux pas. Couture is about emotion, but it’s also about faultless cuts. Compare this collection to Azzedine Alaïa's piercingly perfect masterpiece of a collection, which was one of the absolute highlights of the week. 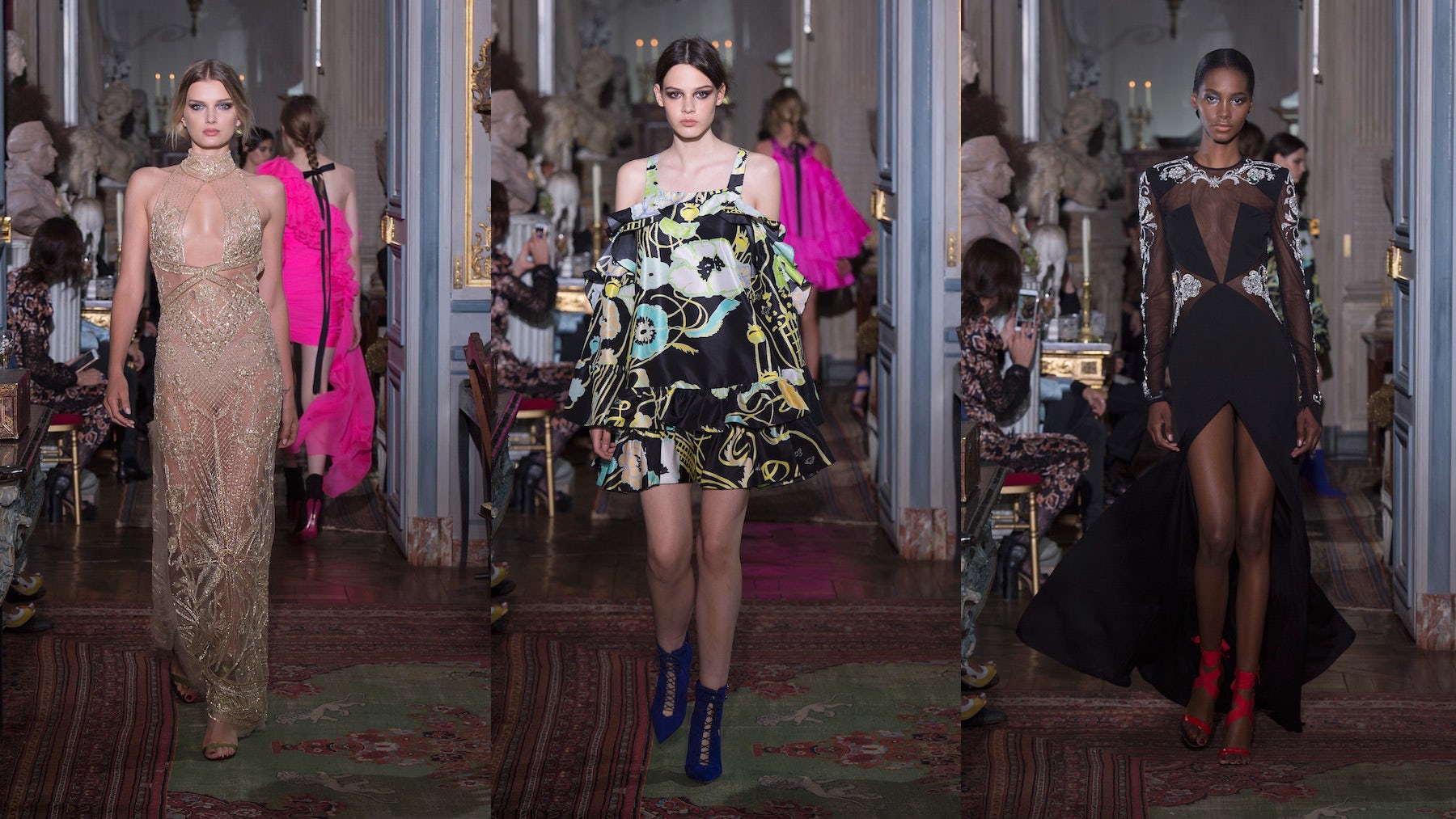 View Collection
Couture is certainly not about messiness and cheapness, though it seems Dundas and Ronald Van der Kemp — both of them new additions to the calendar — didn’t get the memo. Van Der Kemp does couture. His own take on the matter is made from upcycled materials. But the collection was a succession of fashion clichés, from nods to Yves Saint Laurent to winks to Mariuccia Mandelli that, at its best, had a fashion school, haphazard flavor. As for Peter Dundas, his idea of skipping seasons and embracing drops is clever, but aesthetically he keeps repeating the same sexy chick trope he explored at Pucci and Cavalli, which is honestly starting to feel tired.

Amidst the new arrivals, couture itself looked a little old all of a sudden. Couture is not about image, after all. It is essentially made-to-measure fashion executed with the highest craft. A madame image is invariably attached to it, because princesses and madames used to wear it, even in the daytime (daywear was, by the way, the biggest obsession of the season). Yet, even madames lead different lives nowadays and couturiers, this season, took two opposite positions, pitting traditionalists against modernists. 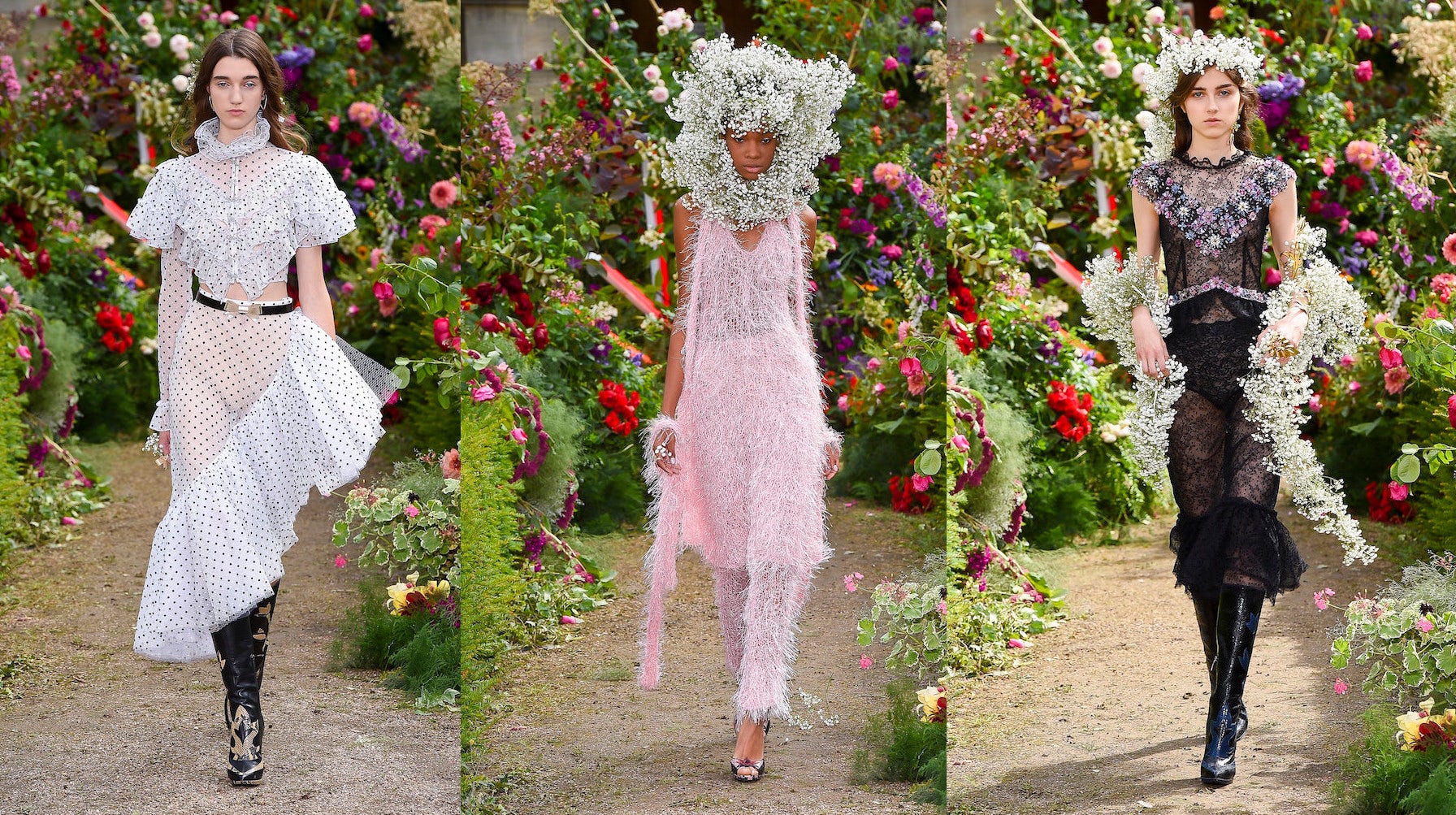 Paradoxically, even Giorgio Armani, a die-hard innovator when it comes to ready to wear, opted for the archly traditional image of a veiled woman wearing longuette skirts and sculpted little jackets. His choice of fabrics and embroideries always has a synthetic, industrial feel, which made the nostalgic look appear even stranger. Chanel’s classy yet somber succession of heavy coats and sculpted tailleurs felt like marvellous vestiges of an old and sinking world.

Meanwhile, Dior’s Maria Grazia Chiuri was feeling slightly nostalgic for the past too. She looked at the founder of the house himself, Monsieur Dior, delivering a mostly grey collection that was a fairly expected tour around the New Look silhouette. It marked progress from last previous season, but the effect was somehow monotonous, lacking elan and variety. 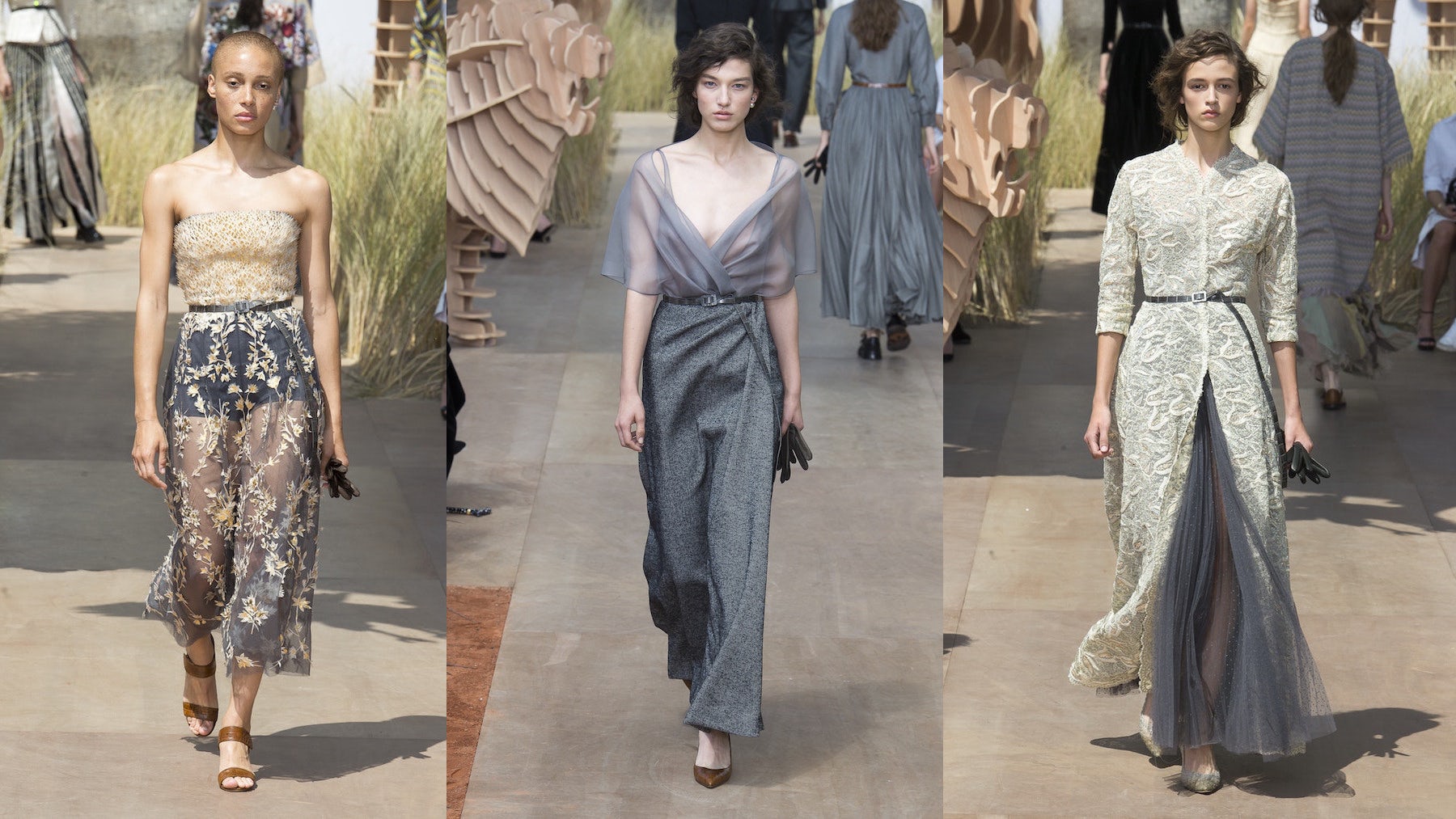 It was Chiuri's former colleague at Valentino, Pierpaolo Piccioli, who dared the modern card and won, delivering the most touching show of the season. Towards the finale there were probably too many overdecorated gowns, but the beginning of the Valentino show, with flowing lines and the idea of artful mismatch highlighted by the arty, dusty palette of Zurbaran pastels was truly stunning. Working with such elegance around an idea of slouch and ease is the stuff of masters.

Piccioli is a skilled colourist. He does colour in a spontaneous and heartfelt way, while decoration seems to be a little forceful for him. He is a quiet talent doing wonders. The couture he proposes looks like ready to wear, some might object, which is probably true. Yet there is a difference — and a big one — in the way things are made, something only felt by clients. This is exactly what makes couture heroic and relevant: it stands for privacy and shyness in a world of glaring spotlights and overexposure. Leave it to others to think about the red carpet. 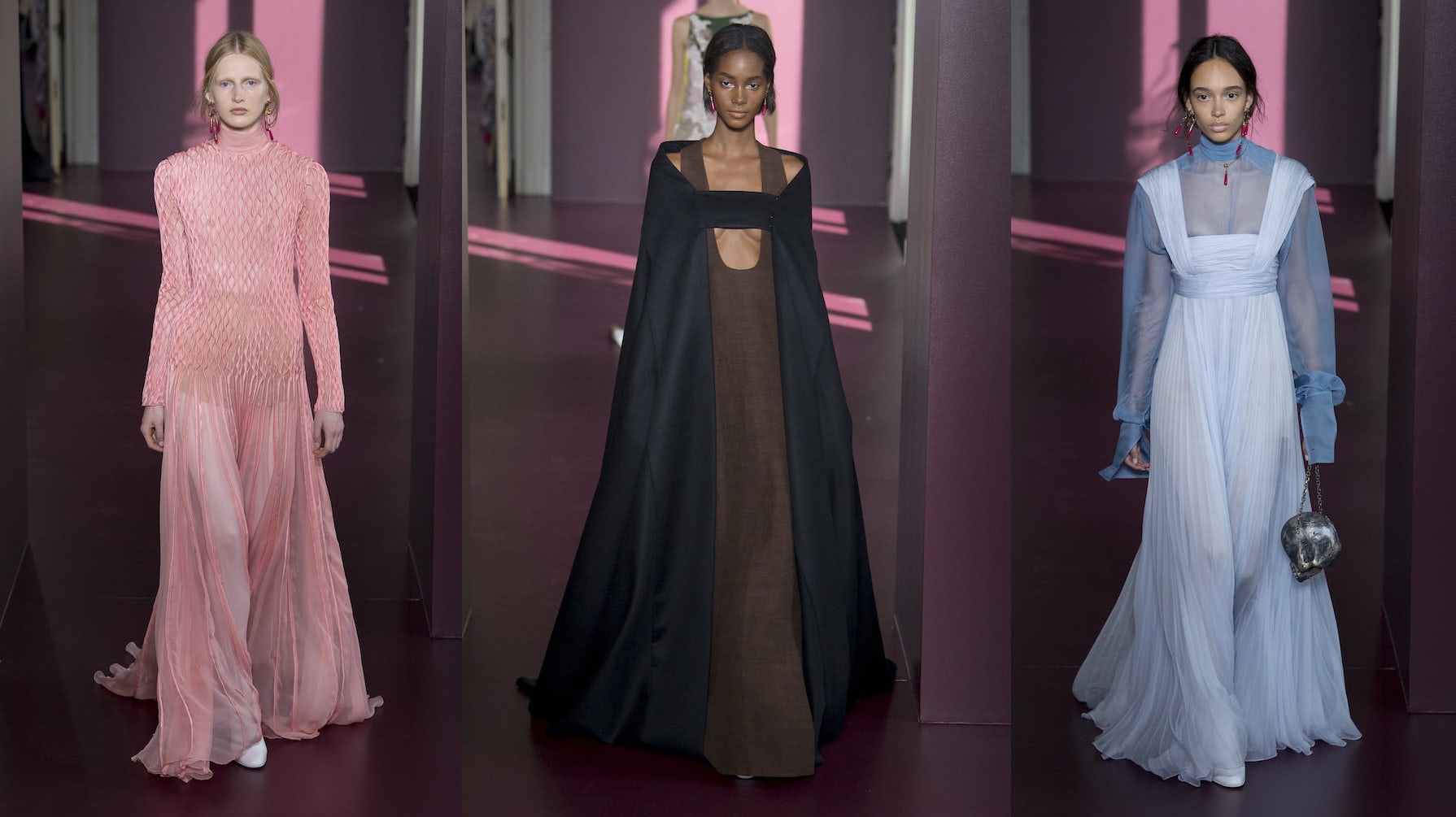 View Collection
Couture can also be a territory for pure experimentation with no real commercial purpose. The magic John Galliano created at Maison Margiela by simply deconstructing and reconstructing the trenchcoat was lyrical, for instance. At Fendi, fur turned into lace and multicolor confetti with an ease that conceals a wonderful manual dexterity. This season, the brand’s Haure Fourrure collection felt heavier than expected, despite the "flowers from other world" theme. Yet, what those precious furs lacked in nonchalance — the look was theatrical and contrieved — they made up for with the wonders of craft. 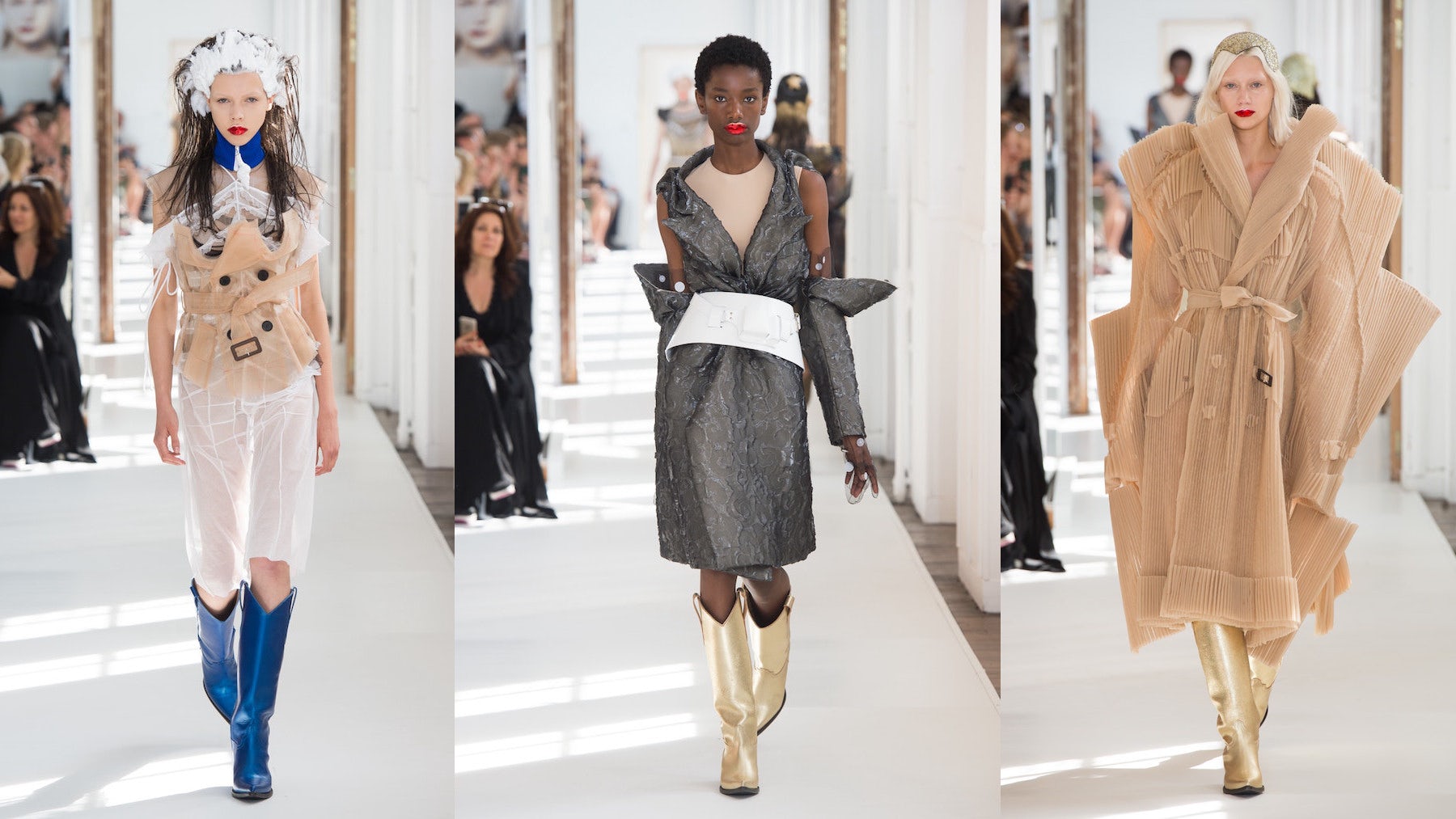 Which brings us back to the dominant theme of the season: confusion. The fashion system is currently in a state of upheaval and this was particularly apparent through the tiny gem-like prism of couture. Nobody appears to have the solution and confusion seems set to continue. But focusing on craft and emotion seem a good place to start. Fashion needs more of both and couture may be the perfect setting for a reboot.