The hooded closing looks were just about the most spectacular things Green has ever designed, but the collection also pointed towards an astute awareness of his label’s commercial needs. 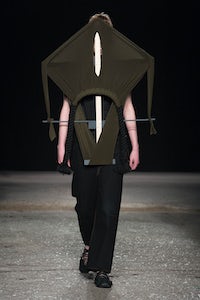 The hooded closing looks were just about the most spectacular things Green has ever designed, but the collection also pointed towards an astute awareness of his label’s commercial needs.

LONDON, United Kingdom — Craig Green’s collections always have conflict at their heart, because they’re always struggling to answer one question: what makes a man? Green has run a gamut in his search for an answer, from soulful idealism to yer basic body-image.

For instance, one of the things he was considering in the show he staged on Monday morning was how you make your body look better for your summer holidays. (The designer himself was looking mighty fine, having just shed a considerable amount of weight.) Some of the models carried devices that Green said were initially based on exercise equipment. Then, he added, they’d morphed into dissecting tables. A few stops later, they reached a state the shownotes described as “walking altarpieces.” So there’s your gamut, from flesh to spirit.

The same spectrum applied to the hooded closing looks, just about the most spectacular things Green has ever designed. Flesh? They were abstract visions of a tropical paradise, the kind of place you’ve been getting your body in shape for. (Green imagined them as backdrops you could fake a holiday Instagram in front of.) Spirit? They could equally have been the monkish garb of a psychedelic brotherhood, the gorgeously coloured, graphically patched palm trees and parrots a spiritual salute to the miracle of nature.

“Paradise” was a state of mind Green claimed he’d been brooding over while he worked on his new designs. It started as a response to the elemental despair that plagued his last collection. But he insisted he couldn’t stop himself slipping back to the dark side. (Exercise equipment to dissecting table, remember?) Dystopia is simply more appealing to him than utopia.

Still, that wasn’t what came across, to these eyes at least. When Green talked about the wrapped pieces restricting the body, I saw romantic Romeo’s doublets. The jersey stretched and cinched across young torsos looked like the most interesting take on sportswear we’ve seen over the past few days. And the denim, with that single signature hole (to release the soul, if you feel like attaching some deeper meaning), pointed towards Green’s astute mastery of his label’s commercial needs.

In fact, that ability, now proven, to make things which sell, was what liberated Green to produce those fabulous finale looks. Their patterns looked like a cartographer's fantasy. Is that what the shownotes meant about “new maps of self-exploration?”

In which case, they’re leading us to some place new and wonderful.