A Marriage of Beauty and Terror

These were clothes to strike a chord: fearless in their conception, but paradoxically driven by fear. 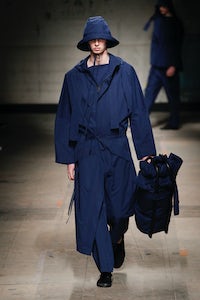 A Marriage of Beauty and Terror

These were clothes to strike a chord: fearless in their conception, but paradoxically driven by fear.

LONDON, United Kingdom — The sea is one of humankind’s most ancient terrors, home to monsters, symbol of the unknown, the unpredictable, separation from loved ones. Its vast reaches inspire enduring images of utter isolation. Craig Green somehow managed to convey all of that magnificent morbidity in the collection he showed.

He said his starting point was the sea, and you could imagine his clothes dressing a community on a stretch of desolate coastline where men worked on and under the waves, battling the elements, losing, looking to other men to restore their faith. They were all there on Green’s catwalk: lifeboatmen, deep sea divers, the monastic types who are one of the designer’s staples, wearing a collage of richly patterned but worn pieces that suggested religion turned make-do cult. I pictured cramped stone cottages, a ruined abbey, the maddening monotone of waves breaking on a barren shoreline. Played out against a Frederic Sanchez soundtrack that intertwined the folkish melancholia of Martyn Bates with the confused burble of occultist Aleister Crowley reading  his poem At Sea over a voodoo throb. The presentation left an overpowering sense of a hermetic world turned in on itself. Masculinity in peril, maybe. Which, of course, it is.

That’s why the protectionist streak in Green’s menswear has always been its poignant calling card. He’s looking out for his boys. Here, they were encased in Michelin Man padding and quilting, their faces tiny inside padded hoods (like a diver’s helmet in fabric). A diver’s feeding tube was translated into ruched bandoliers in odd cartoon colours that Green said he’d lifted from school uniforms (So not weird!).

The huge, rounded silhouettes (were the models also carrying sleeping bags?) were half of the collection. The other half was narrow, tightly draw-strung. But the idea was the same: bodies swathed, entrance denied.

These were clothes to strike a chord. They were fearless in their conception, but paradoxically, they were driven by fear. The boundless ocean, remember? We hardly need Craig Green to illuminate us about the uncertainty of the future, but his marriage of beauty and terror will surely linger long after other Cassandras have folded their tents and stolen away into the night.