Creatures of the Wind

Creatures of the Wind's Quest for Authenticity 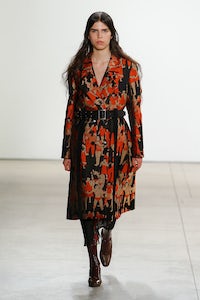 Creatures of the Wind

Creatures of the Wind's Quest for Authenticity

NEW YORK, United States — For Autumn, Creatures of the Wind designers Shane Gabier and Christopher Peters sourced vintage furs, tore off the linings, turned them inside out and embroidered the guts with crystals. They were beautiful in a deconstructed, unaffected way. “We wanted it to feel super authentic,” Gabier said backstage before the show, pointing out friends he and Gabier had cast for the runway.

The designers have been thinking a lot about the notion of community and how the people around them inform their work. The theme of togetherness took hold so strongly, in fact, that the duo rendered stills from 1980s video footage of a commune in the Pacific Northwest as a pattern: silhouettes of humans — hanging off and around each other — were embroidered onto a belted trench.

Overall, the collection felt more personal than before. Instead of dressing a fantasy woman, they were dressing their friends in pieces and ideas that are part of their own narrative: leather jackets long and short, rubbery shoulder bags, fair isle sweaters, and mod turtlenecks, often styled with hefty black work boots. It would be good to see Gabier and Peters take this DIY spirit even further. It suits them well.