The points of departure between the Genius designers are so great that they don’t even add up to anything, other than the sheer profligacy of creative fashion talent in the world at large. Does that make Remo Ruffini some kind of visionary? Yes. 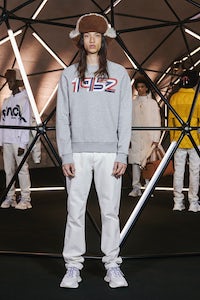 The points of departure between the Genius designers are so great that they don’t even add up to anything, other than the sheer profligacy of creative fashion talent in the world at large. Does that make Remo Ruffini some kind of visionary? Yes.

MILAN, Italy — The vaults under Milan’s central railway station had been abandoned for thirty years, so Moncler had to do a lot of cleaning before they could be used for “One House, Different Voices,” Wednesday night’s event to launch this season’s Genius collaborations. A seriously large population of rats had moved in, according to Moncler supremo Remo Ruffini. They’d been moved on, replaced on Wednesday by swarming humans. Too many on the night, unfortunately, to fully appreciate what Ruffini has achieved with this initiative. The Moncler Genius Building opens to the public on February 24, which should allow more time and space for reflection.

I can’t think of another house where the voices are quite so different – or where they would even be given the opportunity to speak! Ten of them in total, each given a vault in which to conceptualise their re-vision of Moncler. Hiroshi Fujiwara’s Fragment has so far been the bestseller. No surprise: his streetwear aesthetic taps directly into menswear’s Virgil Abloh axis.

New this season, and likely to follow Fujiwara’s success, was Matthew Williams of 1017 ALYX 9SM, one of the original Been Trill guys. In his own collection, Williams is, like Abloh, moving away from the street. Here, he introduced technical knitwear and the technique of garment dying to Moncler’s traditional down-filled clothing. He also used vibrating soundwaves to bond fabrics, but that was harder for me to understand than the fact that he slowed the Cranberries down 60 TIMES!!!! to create the elliptical, blurry soundtrack for his vault.

Such challenging, totemic cultural crossovers could be the essence of Ruffini’s project. Take Grenoble for example, maybe the most traditionally traditional Moncler category. Mountain gear! But creative director Sandro Mandrino was thinking about the 50th anniversary of Woodstock. He staged his vault in a rave-y fluffily psychedelic overload by Icelandic artist Hrafnhildur Arnardóttir (more conveniently known as Shoplifter).

If Genius is designed to unleash the wild man/woman in its collaborators, Mandrino was proof. But Craig Green, who has been a prime catch for Ruffini in his effort to place his company at fashion’s forefront, is better. There are few designers who can so successfully match concept and outcome. For this latest Genius effort, Green made an installation highlighting travel and lightness, his idea of the essence of Moncler. It was hugely technical and it all happened overhead. Night became day, boats became planes, industrial noise became celestial sound.

Simone Rocha made an eerily twilighted silver birch forest, heavily scented with raw earth, through which her models moved in a trance. If you’re familiar with her own collections, you’ll appreciate how intriguing it is that she can reproduce her lush design ethos in variations of Moncler nylon. Which she will embroider!

Also new this season was Richard Quinn, British fashion’s golden boy du jour. He said Ruffini had showed up at his East London studio immediately after his last show, itching to add him to the Genius roster. He ceilinged his vault with sweet pop flowers, carpeted it with pitch dark fleurs du mal. In the middle stood his clothes, a discombobulating combo of scuba and duchesse satin, diamante buttons and haute couture hats.

All this and more was Moncler Genius. The points of departure between the designers are so great that they don’t even add up to anything, other than the sheer profligacy of creative fashion talent in the world at large. Does that make Remo Ruffini some kind of visionary? Yes. Does that mean he can sleep at night? We live in hope.