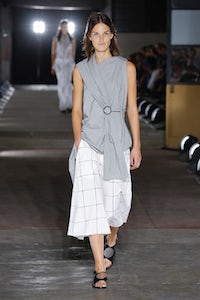 MILAN, Italy — “This is the first time I’ve been excited in a long while,” said Damir Doma before his womenswear debut in Milan after eight years showing in Paris. “I never really felt like a Parisian designer.” Which makes sense for a guy who was only recently lavished with praise as “a modern Armani.” Although Doma quickly shot that down by adding, “I don’t feel like a Milanese designer either.” Meaning that his signature soft tailoring, his monastic volumes and cerebral draping and his mysterious textures have always been pretty sui generis for the Croatian-born, Berlin-signed, Antwerp-sealed thirty-something. Wherever Doma lays his hat, that’s his home.

Still, the move to Milan was significant for all sorts of reasons. Practically, it places Doma within convenient reach of the people who make his clothes. No more bi-weekly schleps from Paris, now the collaborative nature of his work can truly flower. Professionally, the move means Doma’s a stand-alone. That’s what you get when you offer underground minimalism to the Milanese, shown in a grungy concrete garage to a soundtrack of Einstürzende Neubauten and Panasonic. Put it like this, there was never a Margiela or Lang in Milan.

But, as with those two designers, minimalism has run its course as a descriptive for Doma’s work. To refer back to that Armani ref, there was the same intense spotlight thrown on fabric, with fine silks, crepes and cottons allowed to fall in ways that honoured the body. There was a poetry in the casual knotting and cinching, and in Doma’s flair for the unfinished. There was even a sleekness, which cast the more tribal drapes in a lumpen light. But after nearly a decade in business, it must feel energising to Doma to be the new boy in town. 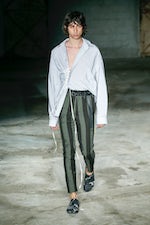 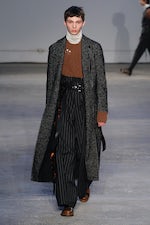 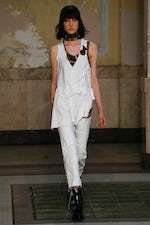 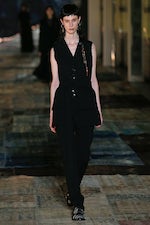