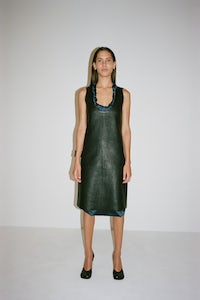 MILAN, Italy — "I have been working on this since April, so I've had time to make up my mind on what I want Bottega Veneta to be," says Daniel Lee, the former director of ready-to-wear at Phoebe Philo’s Celine, who took the creative reins from Tomas Maier after a period of stagnation at the Kering-owned brand. His vision? Sensual, in a streamlined kind of way.

That's how to sum up the direction set by Lee’s first outing — a Pre-Fall collection encompassing men's, women's, accessories, jewellery and sunglasses — which the designer presented in Milan on Tuesday.

Lee decided to make his debut, not with a big runway production, and not even with a static presentation with models, but with products displayed in all their naked glory as objects — clothing on racks, accessories on plinths — installed in the brutalist spaces of Le Cavallerizze at The National Museum of Science and Technology, which he peppered with spare signifiers of contemporary luxury: modernist furniture, rugs, plants.

While the intention of laying the foundations of what appears to be a veritable Bottega reboot was clear, the format made this reviewer's work a tad harder. Quite simply, judging objects is one thing, but style must be seen on bodies in motion. So decisive judgement on Lee’s debut will have to wait until his first show in February.

But the designer’s first steps certainly reflected his intent to be true to his roots. “I'd rather do it two hundred percent my way and fail than dilute my vision into something lukewarm in order to please someone,” he said with a confident grin. The wardrobe Daniel Lee devised was made up of sharply defined tailoring and outerwear, elevated sportswear, easy knitwear, outstanding leatherwear, slinky dresses, amazing bags (the giant Intrecciato already looks like a sure hit) and, well, awkward shoes (square-toed fishnet pumps and crocheted-effect giant sneakers, anyone?).

The imprint of the designer’s time at Phoebe Philo’s Céline was unmistakable, from the choice of firm fabrics down to the confrontational footwear, and he clearly aims at filling the gap in the market opened by Hedi Slimane’s radical makeover of the brand. To be sure, it’s a gap that is attractive for many labels, from Loewe to The Row; but it’s one that Bottega has significant legitimacy to fill because understatement and quiet luxury have always been house pillars.

Lee, however, is no Philo wannabe, give or take the carefully misplaced buttons, the abundance of camel, the sturdy capacious bags and the object trouvé jewellery. He managed to infuse his pieces with a brand of Italian sensuality — scoop necklines, slits, men's blazers elongating the torso — that truly felt his own, adding a zing of vitality to the whole recipe.

As an Italian, it was interesting to hear Lee rave about the Milanese men and women he sees on the street, whose joyfulness, sensuality and certain correctness of dressing he wanted to bring to his Bottega Veneta. It is interesting because these are qualities that, today, are almost as rare as fantasy: a reverie of a better Italy that's long been forgotten. In fact, as it turned out, Lee was thinking of icons of the past, such as Monica Vitti and Gianni Agnelli, or the characters in Federico Fellini movies.

But one way or another, with more or less historical accuracy, he got the point right: the collection had both precision and ease — Italian qualities indeed — not to mention enough short skirts for her and slouchy trousers for him, to suggest a nonchalant take on the very concept of timeless luxury. Which brings us straight to the conclusion.

For a debut, it was assured but relatively low key. There was amazing craft, and a sense of vision. The menswear looked particularly promising, inhabiting a softly formal, post-streetwear space that feels relevant. What’s more, the bags were outstanding. But what's missing so far is the strongly opinionated point of view of a ballsy author. Let's give the boy some time and wait.