There’s plenty of time for the newly installed designer to unfurl an entire brand universe at the world-famous French tennis label, but it’s hard to get there without a clear entry point. 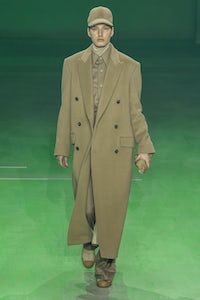 There’s plenty of time for the newly installed designer to unfurl an entire brand universe at the world-famous French tennis label, but it’s hard to get there without a clear entry point.

PARIS, France — It would be easy to let this season’s buzzier debuts — Lanvin, Bottega Veneta and Nina Ricci — overshadow Louise Trotter’s first collection at Lacoste. But with over $2 billion in revenues last year and a logo that’s instantly recognised around the world, the brand is both a commercial and cultural force to be reckoned with. Whether it’s likely to be a fashion force remains to be seen.

But the company’s decision to hire Trotter shouldn’t be taken lightly. And besides, the brand - founded by French tennis champion René Lacoste - is linked to bourgeois taste (a big trend this season), prep and the sportif look that has the fashion industry transfixed.

Staged on the closing day of the Autumn/Winter 2019 season at the Tennis Club de Paris (a bit on the nose, no?), Trotter’s first show for the brand was a strong start but not without its issues. She did best when she took the clichés of the sport—the knit vest, the pleated tennis skirt, the V-neck sweater and, of course, the polo—picked them apart and pasted them back together again, often with a mix of cut-and-paste craftiness or a laidback street aesthetic. Particularly good were the way she transformed the polo into a dense, oversized blouse and knit top, with sleeves down to the elbow and a hem hanging low over soupy pants or elongated it to gown-like proportions, so that it’s gently pleated skirt nearly swept the ground. Also good were pleated apron-like skirts in khaki wrapped around smart trousers and bifurcated, patchworked and oversized chunky cable-knit tennis sweaters and vests, some with the classic Lacoste crocodile logo unraveling, trailing threads. All these items had something new to say about garments we already closely identified with the brand.

Backstage Trotter said she looked to René, the man, for inspiration. “The thing that really influenced me from the beginning is that Rene was a champion, but he wasn’t happy just [to be that]. He wanted to win with elegance, in the right way. The same values he had in the sport, he took into life: joy, hard work, tenacity. I wanted it to reflect how men and women really dress today, beyond sport. We’re constantly on the go, we’re constantly in motion.”

Trotter said she studied the way Lacoste himself dressed. For example, he hid his own neck, so almost every look had a high-necked element, like the many knit collars or mockneck base layers. She ably added touches of whimsy to the collection: a men’s suit in crocodile green or a gym bag made from nappa leather, or those frayed croc logos, one way to say you’re up for the task of dismantling the legacy of label you’re working for (“The crocodile is bigger than the brand,” she said backstage. “It’s an icon.”)

The latter part of the collection felt the most sporty, with its shapely anoraks in lightweight nylons, paired with dresses or more tailored pieces, all with a nice lightness. Some, however, with their straps, half-zipped-off hoods or elastic ties seemed overly complicated and could have done with some streamlining. This was a sizeable collection and needed some editing and focus. For a debut, especially from such a large brand, perhaps it’s better to take two or three main ideas and really explore them, create brand signatures right away to build upon. There’s plenty of time to unfurl an entire Lacoste universe, but it’s hard to get there without a clear entry point.