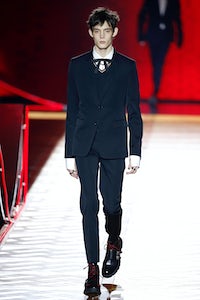 PARIS, France — Kris Van Assche intended his new show as “a New Wave party in a skate park.” The ramps were dramatically picked out in red neon. The first looks were tightly tailored matte black, with ribbon ties. New York’s Mudd Club redux. So far, so obvious and so surprising for Van Assche when a churlish few read all of that as an expression of depression. Pas du tout. The red and the black were, he insisted, pure defiance. Aside from a global situation that demands that sensitive creatives must make their own stand against the relentless slide into the abyss, it’s so easy to understand why Van Assche would feel a bit me-against-the-world. He is a designer who has, over and over again, managed to make a meal of a mouthful, constantly recreating a very defined set of preoccupations season after season. And he’s been walloped for it.

Today illuminated the KVA conundrum. Those New Wave early 1980s loomed particularly large, as ever, black polish glinting on the models’ nails. How wonderful it was to hear DAF’s Küss mich mein lieblingagain.  How frustrating it was that that particular track’s insistent sexual thrum wasn’t translated into the clothes, which remained as tucked-in-tense and buttoned-up-tight as they’ve always been. Maybe that’s what sells them. The discipline was almost military. These were clothes that answered any questions boys might have about themselves, and boys have all sorts of questions. But discipline also sparks defiance. So maybe Van Assche is simply squaring a circle others can't see. 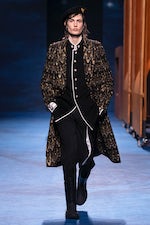 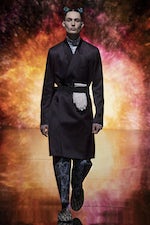 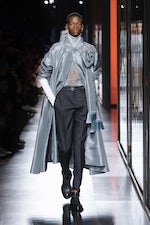 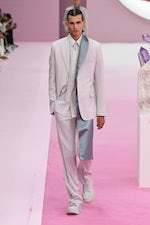