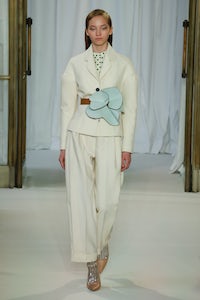 LONDON, United Kingdom — Delpozo designer Josep Font must see life through vintage, rose-coloured glasses, as his vision of women today is a demure throwback to the 20th century’s idea of ladies who lunch. Luckily, it seems those women still exist, and the Madrid-based designer is indulging their most gussied-up, nostalgic selves with his “prêt-a-couture” creations (demi-couture perhaps?) that he says marry off-the-rack distribution methods with haute couture-level embroideries and finishes.

With that premise in mind, it makes perfect sense that Delpozo sells via “doors” like Moda Operandi, Lauren Santo Domingo’s trunk show site, however it was the brand’s new London boutique and a rising interest in the city that prompted a move from NYFW to show in the British capital.

Whilst Christian Dior once spoke of designing flower women, Font seems to be designing very flower-y women in a similar vein, and this season his saccharine sweet application of embroidery, pastel shades, and blooming, petal-like shapes was attributed to the inspiration of lotus flowers seen in an old National Geographic, and the ice cream colours of Ines Longieval’s abstract portraits.

Wafting around the Royal Institute of British Architects, his wan models wore curling leather sash belts over their crisp pleated trousers and city shorts, as ideas of the lotus (not FLOTUS, he joked backstage) came thick and fast as plush bags or giant corsages, just as a houndstooth motif was blown up to larger-than-life proportions across capes and sparkling knitwear. With a chapter of plissé tulle, embroidered floral lacework and fil coupé jacquards encrusted with feathers, the level of craftsmanship truly does warrant the quasi-couture appellation that Font has bestowed on the brand.