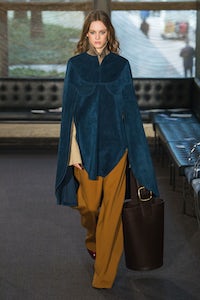 NEW YORK, United States — Before presenting his Autumn/Winter 2018 collection, designer Derek Lam said he was inspired by “a really positive relationship” that the women in his life often tell him about. Mother and daughter? A wife and her husband? The secret joys a woman shares with herself? None of the above. “An equestrian and her love of her horse,” he said.

That was a bit of a wildcard answer (and proves Lam hangs out with some very fancy women) but it yielded a fruitful collection, one in line with his ethos of utilitarian-chic sportswear. By showing at The Pool inside The Seagram Building, on the former site of the storied Four Seasons restaurant, Lam conjured the era of “ladies who lunch” socialites and New York City power players — the types who have the means to actually own and keep horses. Still, his intention was to shy away from these Old Money connotations that equestrian sports can bring to mind, and replace them with something more fluid and sensual.

Lam played around with the horse theme, but didn’t take it literally. Yes, there were leather-trimmed caplets, lean, side-stripe riding trousers and handsome riding boots — all lovely — but they were peppered throughout with a deft hand, and the result never felt costume-y. Instead, Lam let small motifs evolve: a cape became a floor-length turtleneck dress in rustic khaki cotton twill; racing stripes became jaunty chevron graphics on fine-gauge knit tops; horse graphics were blown up, transforming into a lovely abstract pattern in striking orange. The collection had an array of wonderful day clothes, from high-waisted jeans with contrasting stitching to midi skirts in emerald green suede or gray double-faced wool to handsome coats and tailoring in houndstooth or pinstripe for just a hint of Savile Row rakishness. The final three gowns with their gestural folds and easy movement were the epitome effortless elegance, and were modeled after women riding side saddle — horseplay we can get behind.