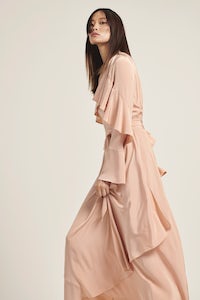 NEW YORK, United States — Only recently returned to the fold, Nathan Jenden took medical leave in July, so Diane Von Furstenberg once again finds herself with a brand in flux. She seemed entirely unfazed by the challenge during her presentation on Sunday. Unflagging optimism was her default. In fact, she made a telling analogy with those classic Disney cartoons where all the critters in the animal kingdom band together to make the princess’s life right.

According to DVF, Jenden put together a feisty young design team before he left. Those troops are now being marshalled by new chief executive Sandra Campos. The MO was obvious in the clothes on display. Take the brand back to the source, which, with DVF, means one thing: the original wrapper. “In going back into the archive, we found old things that look new again,” said Campos. “We’re going back to being feminine.” So the wrap dress appeared with a ruffle, or topped with a fluid wrap skirt, which turned into a halter dress with a little artful manipulation. DVF described one dress as “Empress Josephine meets Gold Rush,” its empire-line bodice framing a portrait neckline.

That particular hybrid defined the pioneer theme in the collection — “our version of the heroines of the frontier,” said DVF. There were blouses of eyelet cotton, an Amish quilt pattern on a chiffon bomber and full petticoats under a wrap dress. She herself is scarcely a pioneer of the covered wagon kind. It was more the cultural ferment of the 1970s where she flayed her mark. So a bias-cut disco fantasia of cyclamen silk edged in deep orange looked more “authentic.” The colour combination evoked classic YSL. “I grew up with that,” Diane said gleefully.

It was always obvious that her brand’s reason to be was her. DVF’s past flirtations with contemporaneity, most recently with Jonathan Saunders, have often yielded striking results, but Campos, bringing the clarity of fresh eyes to the situation, has quickly learned, like many before her, that the oldies are the goodies. All hail the wrap, and its handmaiden, sell-through.