Kris Van Assche has vision. The set and soundtrack proved that. But he needs to surrender fully to it — step out of the corner and onto the dance floor. 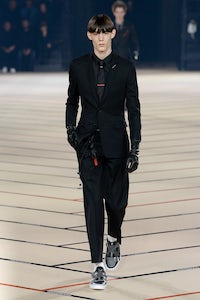 Kris Van Assche has vision. The set and soundtrack proved that. But he needs to surrender fully to it — step out of the corner and onto the dance floor.

PARIS, France — It was Christian Dior’s 112th birthday on Saturday, so Kris Van Assche threw him a party. HARDIOR – hardcore Dior was the theme. “They should just let us rave,” a sweater pleaded, next to a picture of Dior. How he would have responded to the thunderous, all-enveloping blast of Frederic Sanchez’s soundtrack is moot. But Van Assche did his usual respectful best to honour Dior’s memory with the tailoring that has become his own signature. In an homage to the atelier, he even turned jackets inside out so the details of their construction became a pattern.

Van Assche was never a raver. He claims he was the quiet Goth in the corner, in his army boots and stretch jeans. So maybe fashion is a way for him to work out youthful issues, a need to make good with everything he missed, for example. The collection went three ways: New Wave, Rave, MoshPit. The first was the tailoring, black, white and red. Sharp, precise, Numanoid. The second took a leaf out of the Candy Kids’ book. Acid colours were sponged onto big shearlings. A ponyskin trench was offered in a dazzling orange, a suit was crusted with tiny coloured confetti. The last section used Dan Witz’s mosh pit paintings, printed on a sequined jacket or a huge cape.

“I look for contrast,” Van Assche acknowledged. He definitely got that in his marriage of hardcore outlaw and suited gent. But the precision of the latter diffused the furiousness of the former. Lord have mercy, can we say it again? It’s always the way. Uptightness wins, which is infuriating because Van Assche has vision. Saturday’s set and soundtrack proved that. But he needs to surrender fully to it, step out of the corner and onto the dance floor, honour the wanton spirit of the mosh pit.