Kris van Assche injects himself into a sweet spot somewhere between the 1940s and the 1980s, and the result was actually quite palatable. 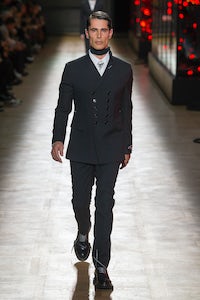 Kris van Assche injects himself into a sweet spot somewhere between the 1940s and the 1980s, and the result was actually quite palatable.

PARIS, France — Kris van Assche is a traditionalist. While the fashion world around him roils with the influence of The Street, he felt the time was now or never to push the button on Dior’s enduring DNA, the wasp-waisted formality that is forever sealed in history as the New Look. He even sent a sweater down the catwalk woven with a reminder of the fact: LE NEW LOOK 1947. And he finessed the issue of gender (Christian nipped his waists for women, after all) by bringing over a female adept from the couture atelier. Together, they transmuted all things haute into menswear. To underscore the specificity, Van Assche attached archive photos of the actual looks he was coopting to the hangers where his re-visions hung. He fetishizes Christian Dior. Some of those jackets – the high-button cutaway, for instance – were straight outta Chris’s closet. It would be deeply strange if it wasn’t for the fact that Van Assche is equally attached to Boy George and Dave Gahan and Pet Shop Boys, all them Dior Homme campaign stars. In other words, there’s a sweet spot for him somewhere between the 1940s and the 1980s. And then he injects himself in there somewhere, as the 90s clubkid manqué. Phew!

That stew doesn’t always taste so good, but Van Assche’s latest serving was actually quite palatable. There was still the stiffness that is his curse. He’d even emphasized it with a ribbon of white stitching to highlight the suppressed waist that was his masculinized version of Dior’s classic Bar silhouette. And some of the lapel action he’d borrowed from Dior couture felt too self-conscious to make sense to now (it was surprisingly New Wave in essence, but even under that umbrella, it didn’t really work). But all of that was upended by Van Assche’s injection of his own culture. Like the energetically tacky tribal tattoos that provided the leitlotif of the collection. Or the layering of polos and sweats and even the occasional turtleneck. Plus baggy jeans, inevitable. And there was outerwear that was almost out there enough to shake the monkeys out of the trees: a camel duffel with fluoro citron for lining, a leather puffa collared in absinthe shearling. Van Assche’s repertoire of signature flourishes has never been vast, but here, what might seem like limitations elsewhere became a testament to the power of focus.